Our Tenth Auction Ends Successfully and We Now Unveil Auction #11

October 31, 2019
It is hard to believe that ten successive auctions have come and gone. In my last post about the third auction I had noted that bidder competition had begun to intensify and that has continued, with 2 or 3 new bidders discovering the auction each week and trying their hand at obtaining some bargains. This week we are pleased to offer our usual, balanced selection of early and modern stamps, which you can view by clicking the link below: https://www.brixtonchrome.com/collections/running-auctions?page=1&grid_list=grid-view A special announcement for Centennial Collectors: I have taken possession of the Dr. Jim Watt collection of the Centennial issue. It occupies 11 large rubbermaid bins, so needless to say, I have not yet had time to go through all of it, but from 1 day's examination I was able to gather that it includes: Two cartons of better rate covers, including several single usages of the $1, 25c, 50c and 20c high values, the finest known bulk mailing receipts
14 comments
Read more

Our Third Weekly Auction Turns Up The Heat

September 06, 2019
Having held two successful auctions now, it is time to introduce more high value material. In this week's sale there are multiple stamps cataloguing over $200, and mostly all in VF condition. Of note there is a 5c perf. 14 surcharge from British Columbia, an 8c Numeral and a beatifully centered 2c Maple Leaf. Postal history features some nice material also, with a mint 10c Nesbitt envelope from 1860, a lovely 1961 registered cover to Czechoslovakia with a mixture of definitives and contemporary commemoratives, and many other items. I have tried to include something for everyone, though we have listened to our bidders and left out much of the modern 1970's and 1980's material, as well as the 1930's unless such stamps are pristine NH. All but one lot sold last week, and there were many bargains that were had, due to low bidder turnout. Thus you would do well to take a look at the auction and get your bids in early, as earlier bids win in case of ties, which did hap
11 comments
Read more

August 30, 2019
Last week's auction saw spiritied bidding by a small handful of customers and new participants. The auction program that I chose turned out to have all kinds of probems, but my customers were good sports and we worked through them. Of the 40 lots on offer, 36 of them sold and while the prices were soft, I was glad to see the bidders get some deals. With the conclusion of that auction I replaced the app that did not work with a new one that is much more robust, and have put the current auction up for public viewing: https://www.brixtonchrome.com/collections/running-auctions All 40 lots are selected to be cover a wide range of price ranges and periods within Canadian philately. Although a few of the stamps are the more commonly seen "meat and potatoes" stamps, I try to include material that you will not see regularly on offer at marketplaces like e-Bay, Happy Bidding!
7 comments
Read more

August 22, 2019
It has been many months since I have written a post. The business went through a difficult period and I had to focus all my attention on altering the business model and surviving our departure from e-Bay. However, I am pleased to announce that soon my postings will be able to resume, hopefully by October. In the meantime, I am introducing a weekly public auction. It will close every Wendnesday at 8pm Atlantic time and will feature 40 different stamps, booklets or covers taken from my inventory. The lots will be carefully selected to try to give bidders a range of material to bid on, both in terms of the periods covered, and the price range of material. My intention is for people to have fun and therefore most of the lots are not too expensive. Bidding starts at just $1 per item and proceeds in $1 increments. Check out the first auction at the link below, and watch this space for weekly announcements: Weekly Auction, Closing August 28, 2019 at 8pm Atlantic
7 comments
Read more 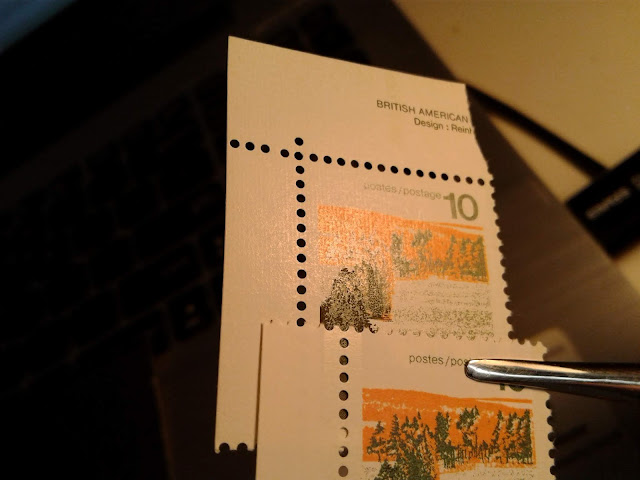 This week I examine the last two physical characteristics of these stamps before I get into the most significant topic of this issue, which of course is the paper varieties. The two characteristics that I discuss this week are the gum found on the stamps, as well as the chalk-surfacing found on the mid values and BABN printings of the $1. The 10c value through $1 landscape designs are found with three different types of chalk surfacing on the paper. Two of them are very distinct and easy to distinguish, while the third looks very similar to the second. The picture below shows the first two of these types: The first printings of the 10c through 50c that were released in 1972 show distinct vertical ribbing on the surface, as shown in the picture. It is thought that the ribbed coating was experimental and intended to see whether or not is was required in order for the ink to properly adhere. The stamp on the bottom shows the smooth chalk surfacing that replaced the rib
11 comments
Read more

This week I cover the aspect of the tagging on these stamps. A lot has been written in the catalogues such as Unitrade over the last 30 years about the tagging on these stamps, that did not used to receive any attention at all: namely the distinction between the OP-2 and OP-4 variations of Ottawa tagging, as well as the 3 mm and 4 mm variations. However, there are other qualities to the tagging that are worthy of attention by the diligent specialist as well. This week's post discusses two of these in depth: 1. The intensity of the tagging, as it appears under normal light, and 2. The different methods that were used to apply the tagging to the stamps. In the case of the low value stamps printed by Canadian Bank Note Company, there are notable differences in the appearance of the tagging on the stamps. Some stamps have tagging that is very light, being barely visible under normal lighting conditions, while others have moderate tagging that is clearly visible. Some stamp
10 comments
Read more

The Perforations on the 1972-1978 Caricature Issue of Canada 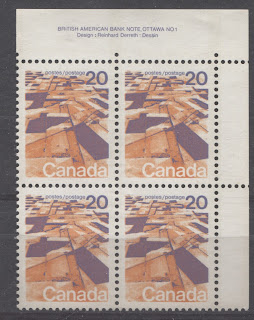 This week, my detailed blog post about this issue looks at the perforations in detail. In addition to the basic differences in measurement, all of which are listed in the catalogues there were some difficulties encountered by the CBN as this was the first time that they had used comb machines to perforate stamps. In addition, there are many instances with the sheets and the plate blocks where you can see double strikes of the comb perforator, which give some clues as to how the panes were laid out in the overall print layout. Some examples of the types of things covered in my detailed post are shown below: Here this block shows selvage at the sides that is fully perforated through, while that at the top and bottom of the sheet shows only a single extension hole. This suggests that the panes were laid out horizontally in the print run. On this pair you can see a clear difference in the appearance of the vertical perforations on the bottom half of the bottom stamp in
17 comments
Read more
More posts