Showing posts from June, 2016
Show all

We are now getting close to the end of our detailed coverage of this wonderful Canadian stamp issue. The only topics left to discuss are the postal history, the issued imperforate issues, the part-perforate coils, the 1926 surcharges and finally the War Tax stamps. After this, it will be time to start tackling the King George V Issues of the remainder of his reign, which as I pointed out in an earlier post are horribly neglected by philatelists. Today's post will deal with two closely related topics:

The Admiral Issue covered a period in which there were some major changes in postage rates. In 1915 the 1c War Tax was introduced, which was required to be paid on all domestic mail and mail to the United States. Thus the domestic rate for regular letters rose from 2c to 3c, while the rate for postcards and printed matter rose from 1c to 2c. In 1926, the War Tax was ab…
Post a Comment
Read more

Today's post will examine the different booklets and booklet panes that were in use during the life of this popular series. The Admiral issue has the distinction of being the first issue to introduce booklets in two different basic language formats: French and English. This dual language format would continue until the introduction of bilingual booklets in the 1940's during the life of the War Issue. As we shall see, the French booklets were issued in much lower numbers than the English booklets, making them very scarce today.

All the booklets of this issue consisted of a plain front and back cover, generally in the same colour as the stamps inside, with an engraved coat of arms and either the inscription "Canada Postage" or "Timbres Poste". The booklets were bound, in most, but not all all cases by a strip of coloured tape, which was always in a darker version of the colour of the stamps inside. Over top of this would be a single staple to hold ev…
1 comment
Read more 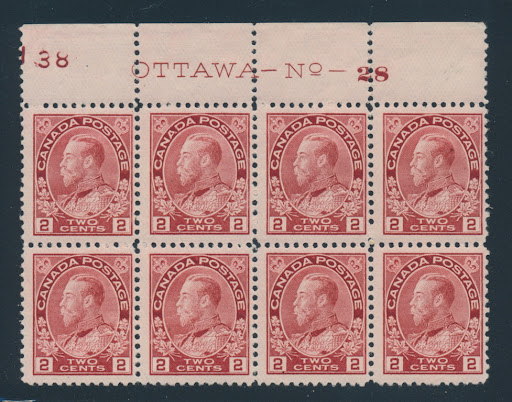 One aspect of the Admiral issue that has become of widespread interest to specialists concerns the marginal markings that appear on the stamp sheets. There are three general categories of markings that are to be found on the sheets that were printed:


Plate inscriptions, which appear in the top centre margin of the sheets. R-Gauge and pyramid guide lines which appear at the sides.Lathework patterns found in the bottom margin of several sheets.  This post will look at these in more detail.
Plate Inscriptions

Early printing of the 2c showing the order number at left and the plate number at right.