We are now getting close to the end of our detailed coverage of this wonderful Canadian stamp issue. The only topics left to discuss are the postal history, the issued imperforate issues, the part-perforate coils, the 1926 surcharges and finally the War Tax stamps. After this, it will be time to start tackling the King George V Issues of the remainder of his reign, which as I pointed out in an earlier post are horribly neglected by philatelists. Today's post will deal with two closely related topics:

The Admiral Issue covered a period in which there were some major changes in postage rates. In 1915 the 1c War Tax was introduced, which was required to be paid on all domestic mail and mail to the United States. Thus the domestic rate for regular letters rose from 2c to 3c, while the rate for postcards and printed matter rose from 1c to 2c. In 1926, the War Tax was abolished, and the rates for each of those two services dropped back down to their previous levels again. In 1922, the special delivery rate increased from 10c to 20c and the registration fee also doubled from 5c to 10c. Finally in the 1920's the UK and non-UK surface rates were introduced: 3c per ounce to the UK and 8c per ounce to non-UK destinations.

These rates and changes in rates impacted the demand for various stamps in the series and influenced the manner in which they will usually be found on cover. This in turn drives what the main opportunities are for specialization in the postal history of this issue.

The most common stamps of this series were of course the 1c, 2c and 3c, which were used either for printed matter, postcards or single-weight letters to domestic or US destinations. Most of these are very common and worth little. However, it is possible to form a very nice collection of scarce town cancels when collecting these relatively common items. It is also possible to kick them up a notch by looking for fancy advertisements or corner cards on the covers themselves. Although these are generally not as intricate or fancy as the 19th century designs, there are still plenty of nice ones that can be collected like the one shown below: 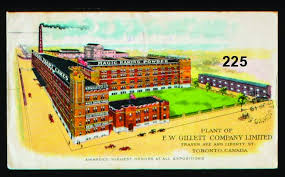 The 5c dark blue and 7c yellow ochre will be relatively common stamps on covers to Europe, and local registered covers respectively. The registration fee was 5c until the 1920's, so usually the 7c stamp will be found either on it's own, or in combination with a 1c stamp, while the 5c stamp will most often be found on its own. The later 5c and 7c stamps will be found for entirely different usages. The 5c stamp will still occasionally  be found on cover to Europe, but most often you will see it in multiples to pay either registration or special delivery fees, or the 10c foreign letter rate that was in effect from 1921 until 1925. The red-brown 7c stamp I believe was issued for postage to non-UK destinations before the rate went up to 8c, which is what you will usually find the 8c stamp used for. Multiples of the 8c used to pay higher registration fees would not be common at all, as would multiples of the 7c. These are items to watch for.

The 4c stamp would appear to have been issued mostly to pay the Empire letter rate to Commonwealth countries, plus the 1c War Tax, until it was abolished in 1926. Single usage will be very common, although most of the covers you are likely to see with this stamp will be to the UK. Covers to any of the smaller Commonwealth nations will be much, much scarcer, and worth quite a lot more than the Unitrade catalogue values would suggest.

The three 10c stamps will be relatively common on cover, but how they will be found will depend on the period. The first 10c - the plum stamp, will have been used primarily to pay for special delivery, high value registration and on either bulk mailing receipts or parcels. It could be used to pay the double weight rate to Europe, which would be much less common, or the quintuple local rate, which would be very scarce. The second 10c stamp - the blue stamp, would be used mostly for registered letters, when the rate went to 10c, and would generally be found in combination with a 3c stamp. Single usage would generally be confined either to the single weight foreign rate, or the quintuple local rate. A much more common usage of these stamps is to be found in pairs for the 20c special delivery fee, or in larger multiples on bulk mailing receipts or parcels, though few will have survived on their original cover or parcel wrapper. The last 10c stamp, the bistre brown stamp would have been used mostly for local registered letters, as the foreign rate had now dropped to 8c. It will usually be found in combination with a 2c stamp. Again, multiples used to pay special delivery, or fees for bulk mailing receipts or parcels will be relatively common - though very few will have survived on cover.

The three high values will be most commonly found on bulk mailing receipts bar none. Covers of any kind with these stamps will be very scarce to rare, as the only rate for which a 20c stamp would be required would be the special delivery rate after 1922, and there was a special delivery stamp issued for that purpose. Generally these would be found either on parcels or very valuable registered letters for which a substantial amount of insurance was purchased.

Generally speaking the postal stationery products were designed to be used locally, so the denominations are limited to 1c, 2c and 3c rates. The only exception is the 10c registered envelope that was issued during this period. By and large, mint items are much more common than commercially used, as most of this material would have been thrown out at the time of its use. Some of the most expensive and scarce items are postally used. Occasionally items were uprated for foreign use or other uses which were not intended. These are much more desirable and worth keeping an eye out for. I will now discuss each class of postal stationery product in more detail, identifying the collecting possibilities in each:

These featured an embossed relief portrait of King George V, surrounded by a looped design as shown above. They were generally issued in two sizes, which have persisted until today: the #8 envelope (165 mm x 99 mm) and the #10 envelope (241 mm x 105 mm). There are some special order envelopes that were issued as well to private businesses that are distinguished by their different sizes. So the size differences are the first major vein of specialization possible with these envelopes. The second major way in which these can be collected are the various die types used for the embossed stamp impressions themselves. There were five different dies used on this issue, though not all of them are found on each denomination. Finally, many of the 3c envelopes on hand were surcharged back down to 2c in 1926 when the War Tax was abolished, and some of the envelopes are found with precancels and return notices. Unitrade lists the following:

The last of these, the die 5's are technically not Admirals because they weren't issued until 1931, when the Arch issue was in use. However, collectors may wish to include them as they were the same basic design as the other envelopes. It must be borne in mind that the Unitrade listings are very simplified in the sense that they do not list:

All of these could be included to expand this into a very extensive collecting area in its own right. Catalogue prices for most of this material are very low in relation to actual scarcity, as is the case for nearly all of the postal stationery.


These are the first postal stationery items to feature the issued Admiral stamp design. They were issued to pay the printed matter rates on newspapers and magazines and were generally wrapped around the item to be mailed. For this reason, the condition of used examples is generally not very good, and nice clean items will be very scarce. Because they were only issued for the postage on local printed matter, the rate is only 1c, and so they are found only in green for items issued before 1922 and orange for the later ones. Unitrade lists both a post band and a wrapper in each colour. Wrappers are much larger than post bands and generally measure 152-203 mm x 336-381 mm, while the post bands are 121 mm x 241-279 mm. With die type differences the total number of Unitrade listings for these are 11 items.

This is easily the most complicated aspect of the postal stationery for this period. There are several variations that allow for specialization including:

Once again, the listings are simplified in that they do not deal with shade varieties. 1/2c cards were introduced for use by businesses sending unaddressed, householder rate admail. Otherwise, with one exception, being a 6c surcharge for foreign UPU use, all postcards were 1c and 2c rates. Unitrade lists 68 different basic items. So a complete collection consisting of one mint and one postally used item would consist of 136 items. One suggestion for expansion is to try and get one postally used example from each province, which would increase the size of the collection by 9 x 68 = 612 items. If that isn't challenging enough, you could add major cities in each province: