The 60th Anniversary Of Confederation Issue of 1927

This neat little commemorative set was issued on June 29, 1927, the same day as the Historical Issue. It is one of those sets that most collectors buy for their albums and never think much about. Indeed, Unitrade contains really just one page of listings and so it seems to be a set that does not afford much opportunity for specialization. However, nothing could be further from the truth. In fact, there are several points of interest around which a specialized collection could be formed as we shall see. These include:

When you combine all of the above factors and form a specialized collection you can still spend a lot of money, but over time. In my opinion, this is an ideal issue for someone who cannot afford to pay more than $300-$500 for a single item, or that much per month, or per quarter. Even though some proofs will cost $3,000 or so, a collector with a modest budget could save up for that over a reasonable period, like a year. The used stamps are inexpensive enough that a collector of modest means could occupy themselves with the cancels while waiting for the better items to come along.

The stamps were all designed by Herman Herbert Swartz. Edwin H. Gunn engraved all the designs except for the 3c, which was engraved by Harold Osborn. The printer was the Canadian Bank Note Company.

The Stamp Designs and Issue Quantities 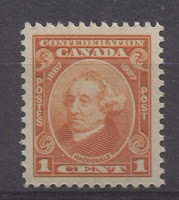 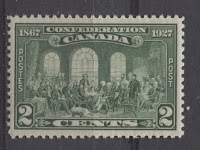 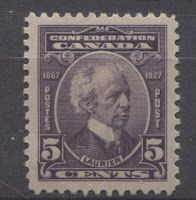 As you can see, the issue quantity for the 20c value is relatively low. This is also a difficult stamp to find well centered and NH, so in my opinion it is a highly under-rated stamp, especially in very fine used condition. Surprisingly though, even the common stamps like the 2c are very difficult to find very fine NH with nice margins. From my experience, the 5c and the 12c are the easiest stamps to find VFNH, followed by 1c and 3c, and then finally the 2c and 20c, which are the toughest by far. The average centering for this issue is fine and given that the stamps were printed in sheets of 100 and line perforated,very fine plate blocks in which all stamps are well centered and NH are very scarce and worth quite a bit more than the corresponding number of VFNH stamps.

Although subtle, there are several shades that I have found on the stamps of this issue. The largest variation seems to be on the 1c, though I have generally found at least two shades of every value except for the 12c:

These shade variations are probably best collected as blocks of four, as they will be much more obvious that way. However, even singles will probably be sufficient if they are mounted next to one another on a page.

Unitrade does not currently list any constant plate flaws on any of the values. I am not sure if this is because none exist, or whether it is because no one has done a comprehensive study of existing sheets to identify them. I will say that plate flaws on this issue are scarce, largely because the plates used to print these stamps were very durable and were only in use a short time. Hans Reiche some years ago had published a small handbook in which he detailed plate flaws found on this and other issues of the 1930's. Unfortunately I do not have a list of these flaws, but can say that I have seen the following ones:

While these flaws may not be constant, I think they are still interesting and can be fun to look for. 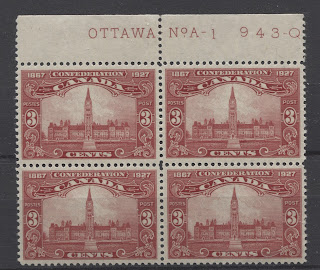 Many plate blocks can be collected of this issue. Generally speaking there is only one position for each plate at the top of the sheet, though on the 2c, there are left (L) and right (R) positions. The size of the block is generally determined by the size of the inscription, with the 3c block above being 4 stamps and many others being either 6 or 8 stamps. The 20c comes in two positions: upper left and lower left:

So the above list makes a basic collection of 36 blocks. If you collect the above shade variations, it can be expanded far beyond that number, though not so much that it becomes unmanageable. 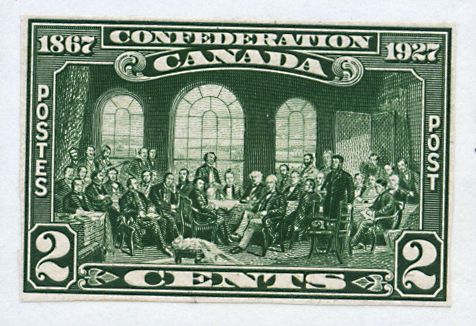 The BNA Proofs website lists no fewer than 36 different proof items as follows:

According to the website, there are only between 1 and 5 known examples of each item, so at $300-$3,000 each, they are quite inexpensive, given their scarcity.

The full listing can be found at this link:

There were 500 examples of each of the following varieties issued for each value:

So there are at most only 250 pairs of each of these varieties in existence, making them modern day rarities. They only list between $140-$240 each depending on grade, making them one of the best bargains of the early modern era in my opinion.

The 1c will generally be found on unsealed printed matter, or in pairs on local letters and postcards. The 2c will be very common and found on local letters or postcards. The 3c value was issued to pay the Empire letter rate to the UK and for local letters weighing more than 1 ounce. and so it will generally be found used singly on those types of letters. The 5c would generally be found either in combination with the 3c to pay the non-UK letter rate of 8c, or it will be found in larger multiples on parcels or bulk mailing receipts, or in pairs or blocks to pay either the registration or special delivery fees. Finally the 12c value was issued to pay the registration plus postage on a local letter, so most of the covers found with this stamp will be single usages.

All values of this issue, except for the 20c special delivery exist with 5-hole OHMS perfin. There are up to 8 different positions:

I do not know which combinations exist for each value. Roy Wrigley published a small paperback catalogue of these issues back in the 1980's and it should still be possible to find a copy either on e-bay or with the specialized dealers of philatelic literature like Phil Banser.

That brings me to the end of my post about this issue. Hopefully you can see that this issue provides plenty of scope for a specialized collection, especially when combined with the next issue, the Historical issue, which will be the subject of my next post. If you want to look through the many listings of this issue in my e-bay store, please click on the following link: