The bill stamps of Canada are the first revenues to be listed by Van Dam and also provide a fine field for the philatelist who is looking to collect beautiful stamps, while having the chance to form large studies of varieties.

There were three issues of bill stamps all shown below: 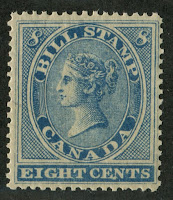 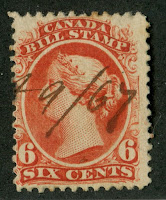 The purpose of the bill stamps was to evidence payment of stamp duties on monetary instruments like promissory notes and cheques. The amount of tax required to be paid would, of course vary with the face amount of the instrument. Cheques of course were the main medium of exchange at this time, so a VERY large volume of stamps would have been printed for each issue. The scarcity of many values today lies in the fact that stamp collectors did not generally seek out mint examples, nor were there really any channels where they could obtain them, and most cheques got thrown out after being processed. The implication of course is that even when an issue has a relatively short life, as in the case of the first issue, there can still be a large number of collectible varieties, due to the very large printing.

Each issue has rarities that cost several thousands of dollars - mostly imperforate varieties and inverted centres. But once you get past those, the stamps become quite affordable. The first and second issues are comparable in price to the Large and Small Queens issues of Canada, but the third issue contains a large number of stamps that list for under $5 both mint and used.

Used stamps generally were cancelled using pen strokes, a date or initials. Occasionally you can find handstamp cancellations. These would be worth a significant premium over the more common pen cancelled stamps. However, in revenue collecting pen cancellations are to be expected and are not considered in any way to be a fault.

It should be noted that Van Dam prices his stamps in fine to very fine condition, but in practice fine is the average grade of this material: centering was generally very poor on the second and third issues. If you are after very fine or superb centering and even, intact perforations on all sides, expect to pay at least double the standard catalogue values. For multiples, expect to pay even more again, as they are nor common, especially with all stamps in the multiple being well centered.

This issue was lithographed and as far as I know, it is the earliest involvement of the CBN in stamp production of any kind. In postage stamps, we don't see the CBN again until the Confederation and Historical Issues of 1927. Because of the nature of the lithographic process, there are a large number of varieties in the form of deformed letters (G for "C" in "Canada) for example and other flaws, which I will list in a minute. The stamps were all blue, with some shades being identifiable - so not a great choice if you want variety of colour in your collection. 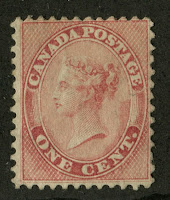 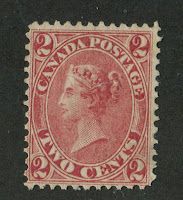 As you can see, the oval frame styles, lettering styles and background shading styles are all very similar to the above issued stamps.

The plate flaws that Van Dam lists on these are as follows:

There are many others I'm sure that are just waiting to be found, studied and documented. In fact if you look at the 8c stamp above, you can see a large blob-like flaw on the "N" of "Cents" at the bottom.

In terms of affordability, the up to and including the 20c are all less then $50 mint in fine hinged condition. In used condition, all these stamps are between $6 and $13. From the 30c upwards, most stamps are $85-$500 in mint condition and $60-200 for used. Van Dam suggests a 200% premium for never hinged and he says that full documents are very rare.

This issue was engraved by the ABN and is a very beautiful issue. The designs are based on the Large Queens postage stamps and unlike the first issue this issue has some varieties of colour, particularly in the dollar values, which are bicoloured. I have seen trial colour proofs of these stamps in the issued colours, but also in dark green, violet and dark brown - the same colours used for the US Official stamps of the same era.

This set had 19 stamps. The first 9 values from 1c-9c, were a dark orangy red, the next six values from the 10c to 50c were blue and the dollar values were various combinations as follows:

The trial colour proofs show different colour combinations including some that were never issued, like the $3 brown and black centre.

There are fewer perforations to be found on this issue, with 12, 13.5 and 12 x 13.5 being noted by Van Dam. However, there are a fair number of paper varieties varying from thin paper to paper that is quite thick, almost like carton paper.

There are very few plate flaws noted by Van Dam and no listed re-entries, although I'm pretty confident that with the number printed and the fact that these are engraved stamps that there must be several in existence. The only listed plate flaw is on the 3c and consists of a gash on the top of the left "3".

Like the previous issue, there are some rare imperforates to be found:

The 10c and 50c blue perforated 12 are scarce and list for between $120-$200 each in used condition versus the normal catalogue value of $6-$35. There is also a perf. 12 x 13.5 variety of the 40c blue that Van Dam lists for $500 in used condition. Other than that, he makes no distinction between any of the perforations in his pricing. 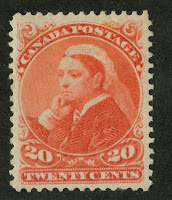 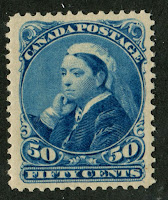 But the frames on the low values seem to borrow quite heavily from this stamp: 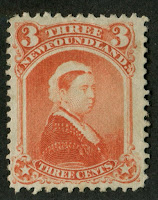 As this was printed at the same time as the Large Queens and Small Queens stamps it follows that we should see the same types of papers and gums. This is indeed the case and one can find the 3c and 6c with Clutha Mills Watermark.

There are two basic perforations: 12 (many small variations from 11.9-12.2) and 11.5 x 12. Papers vary as stated above, but there is also a pelure paper, which is very thin. I suspect though that this is just the thin Duckworth paper 1 and 2 that Large Queen enthusiasts are already well familiar with.

There is quite a variety of colours and frame designs on the values up to the 9c: 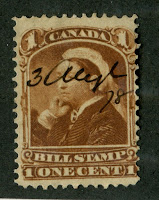 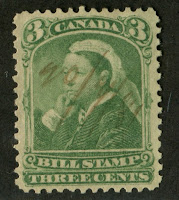 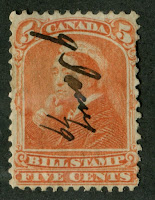 This set had 18 stamps. The 1c, 2c, 4c and 8c are brown. The 2c, 5c and 7c are also orange. Finally the 3c, 6c and 9c are shades of dark green. The five values from the 10c to 50c are all shades of blue and all in the Widow's Weeds design. Then the dollar values are bicoloured as follows:

There are lots of shades to be found in the colours, and like the previous sets, trial colour proofs can be found in the issued colours of the dollar values, though I have not seen any for the lower values. However, I am sure they must exist.

Van Dam only lists two re-entries on the 3c and 6c, though there must be many more, given the large number of printings and given what we have seen emerge for the Large Queens over the past few decades. The stamps are affordable enough in used condition, that this would be an excellent research project for a budding specialist, as I stated in yesterday's post.

In addition to the rare imperforate varieties, the $2 exists with the centre inverted. This lists in Van Dam for $12,500 in used condition.

Other than these varieties, the stamps of this issue are the most affordable of the three issues. Except for the 2c orange which is $95, all the basic stamps to the 50c are between $2.50 and $10 in mint condition. In used condition they range from 40 cents to $6 with most being under $1 (the 2c orange is still $35). The dollar values range in price from $27.50-$60 mint and $12.50-$32.50 in used condition, though do expect to pay more for really nicely centered stamps with face-free cancels. The suggested never hinged premiums are much smaller being 50% for the cent values and 100% for the dollar values. Documents are also much more readily attainable for this issue with only the dollar values being rare.

So the bill stamps are nice sets to collect even for collectors of modest means. If you are wealthy, each of the issues offers rarities to challenge you and you could easily spend a lifetime collecting only these stamps and related documents.