July 21, 2015
The adoption of decimal currency in 1859 necessitated a new series of stamps to replace the old sterling currency issues. It was decided to continue with the same designs as before. The only difference being that the stamps would be denominated in cents rather than pence:

Below are some examples from my stock: 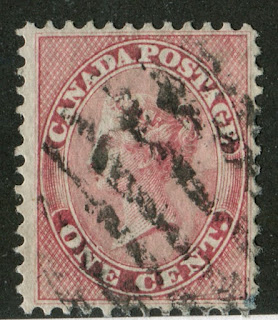 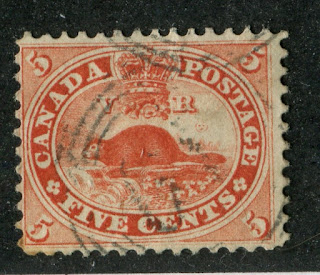 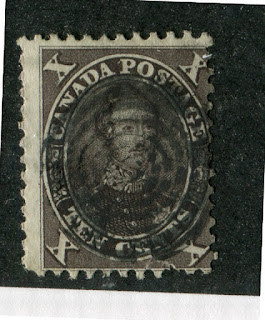 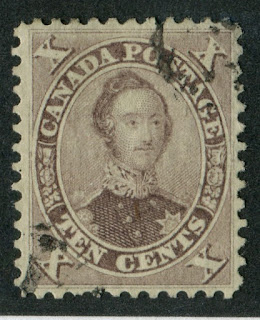 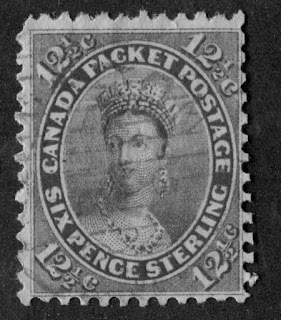 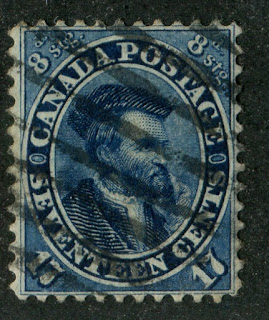 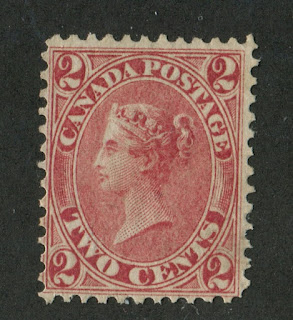 Like the previous issues, these stamps continued to be printed by the American Bank Note Company, as it was now called. Their name appears imprinted in the margins of the sheets and occasionally it can be found impinging into the margins of the stamps themselves. Such varieties are sought after and highly collectible, especially if the stamp is well centered.

Also, as with the perforated pence issues that preceded them, this issue is generally very poorly centered. So philatelists who are used to being able to collect very fine stamps will have to adjust their expectations drastically to view fine as being almost like VF, as VG is the average grade for this issue. If it isn't the centering that is the problem, then it is often small faults, shallow thins, small tears, pulled perforations and corner creases being the most common issues with these stamps.

I must make special mention of the gum on this issue. First of all, it is not commonly seen - most of the mint stamps on the market are without gum. However, when you do encounter it, it is often very thick, shiny and blotchy. It should be noted that the cents issues of New Brunswick and Nova Scotia were printed by the American Bank Note Company at the same time as this issue, and the same gum was employed. So if you are looking for a reference stamp to get an idea of what the proper gum should look like, then the Nova Scotia cents issue is your best bet. In this issue you can obtain a mint 1c, 2c, 81/2c or 10c fairly cheaply and it will prove to be a reliable guide for the gum on this issue.

The other main source of varieties and one which will enable you to date the various printings of these stamps are the perforations themselves. There were two perforating machines used during the life of this issue: one gauging 11.75 and the other gauging 12. Compound perforations can be found, being 11.75 x 12 and 12 x 11.75. The perforation gives a rough guide as to when the stamp was printed:

To say that it is possible to spend one's entire life collecting this issue is an understatement. Indeed, most collectors of Canada vastly underestimate the amount of scope that is possible with this issue:

1. All 52 of the 4-ring numeral cancellations could potentially be found on all the stamps of this issue.
2. The 1c exists in two basic shade groups: rose and deep rose.
3. There are three varieties of paper listed for the 1c stamp.
4. For the rose shade, all three perforations can be found, but only p.11.75 for the deep rose shade.
5. Imprint copies exist of the 1c stamp.
6. Three main plate flaws are found: the Q, E and C flaws (the subject of a separate future post).
7. There is a major re-entry reported on the 1c stamp and a major misplaced entry.

To illustrate how vast the scope of this issue is, or can be, let us take the above 1c stamp and consider all the possible permutations and combinations of varieties that can exist if you only collect them used with 4-ring numeral cancellations:

So in all, a person could collect 4,368 1c stamps and each one would be different in some way. If a similar number of varieties were to exist across all 7 values in the set, that is 30,576 different stamps.

One of the implications of this is that one has to be tolerant of G or VG stamps if one has any hope of forming a specialized collection that is that in-depth, due to the very large number of potential stamps. To specialize in this issue and limit oneself to even F stamps would become very expensive, very quickly, as even VG or G used examples of the most common 5c beaver catalogue $6 or so and rarely sell for less than $1.50 each. If you are wondering what these grading terms mean, the following link will explain them all:


The formost expert on this issue was a philatelist by the name of Geoffrey Whitworth, who published a book on the subject in 1966. He studied all the plate flaws in depth, including some 11 separate states of the 5c beaver plates, and the 26 different printings of the 10c. His descriptions of the colour shades are so thorough that many collectors will refer to a particular shade as "Whitworth's grey violet"for example.

As far as shades go, the most extensive number can be found on the 10c value. Unitrade lists four shade groups:

Plate flaws will be the subject of another future post, as there are too many of them to describe them all here in this general post.

In terms of paper, the Unitrade catalogue does not specify what the normal paper characteristics are. However from my observation  of the stamps in my stock, using a micrometer, I have determined that the normal paper varies between 0.003" and 0.0035"thick. The gum generally adds an additional 0.001" to these measurements. Thus, one would expect the very thick paper to be over 0.004" thick and the very thin paper to be less than 0.003" thick. Lighthouse in Germany sells a paper thickness gauge for a godawful amount of money, i.e. over $200. However, if you look on E-bay for a micrometer, it does the same job, and can be had for around $20-$30. Mine is powered by a watch battery and has a digital readout that can be toggled between meteric and imperial measurements. The differences between these thicknesses is so small that there is no way you can reliably tell the difference between them without one of these devices. Sometimes you can get a sense of whether the paper is thin or thick, but to prove it you need the actual readings, taken from a part of the stamp that is free from gum and hinges.

During this period, Canada also issued its first postal stationery items. These consisted of two envelopes with pre-printed, embossed stamp impressions of Queen Victoria's Wyon bust portrait. They consisted of a 5c red and a 10c brown. They were first issued in 1860, and are nicknamed "Nesbitt" envelopes, as they were printed by Geo F. Nesbitt of New York. All envelopes are scarce, the 5c being worth between $125 and $450. However examples of the 10c envelope used in period are very rare and worth $2,100 and up. These envelopes are watermarked CaPod in large serifed capitals reading diagonally upwards, which can be seen if you hold the envelope up to a strong light.

Below are two examples from my stock. 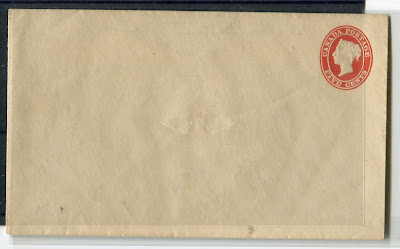 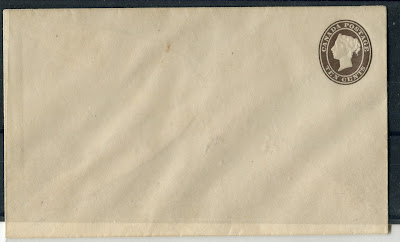 For other items in my stock from this issue, click the following link: