October 30, 2015
Yesterday's post dealt with the paper, shade, perforation and gum varieties that are found on the this issue. Today, I want to talk about plate blocks and plate sheets. Although the basic plates are listed in the Unitrade catalogue for the regular and official issues, there is still little known about which of the varieties that I discussed yesterday are to be found on which plates, and there is no comprehensive listing of which plates are found with the different styles of precancels.

None of the plate blocks in this issue are particularly rare except for the 50c on fluorescent paper and the 50c with fishhook G, and full sheets should be obtainable with not too much trouble for all values up to the 7c. I have not seen many complete sheets of the higher values, although I have seen two of the $1, one being with the "G" overprint and the other without. The relative availability of them should make compiling a comprehensive study a fun and rewarding task. Another area for expansion and challenge would be to try to collect these plate blocks in used condition with in-period cancellations.

Examples of the low value blocks are shown below: 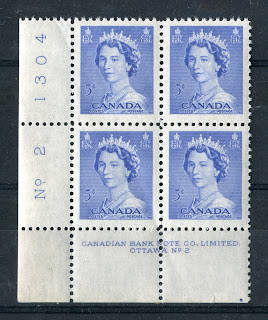 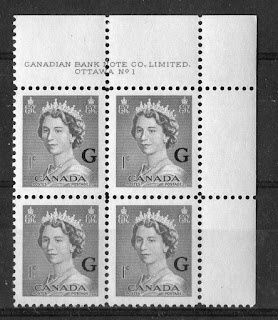 The scans show blocks from the lower left and upper right positions. Each sheet would only have had a single plate block in the outer corner of the sheet, depending on which position in the plate of 400 the sheet of 100 was from. Thus in order to obtain a full set of these blocks for any given plate, a collector at the time would have to visit different post offices and convince the clerks to split up 4 different panes. This created a huge run at postal counters that were not equipped to handle the demand. For a time between November 1957 and May 1958 all inscriptions were trimmed off blocks to stop the public from disrupting post office operations in this manner. However, due to public outcry, the post office reversed its position.

The blocks from the lower left position always have the plate number followed by the print order number in the left selvage. As far as I know the number is always the same for all blocks from the plate. However, a comprehensive study would be needed to confirm this. It would be interesting to try and determine the sequence of order numbers in order to learn more about their significance. On the bottom selvage of these blocks appears the CBN inscription and plate number. The font is a Times New Roman font. In addition, most lower left blocks, and some lower right blocks have a small dot in the lower right corner (lower left on lower right blocks) of the bottom selvage. I am not sure what the significance of this dot is, or why it does not appear in any of the upper positions.

The scans below show some examples of the higher values: 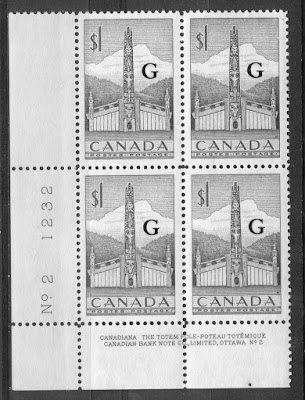 On these blocks, in addition to the CBN inscription, there is a bilingual description of the subject matter depicted in the block. I am not aware of any varieties in the inscriptions, but spelling mistakes and mis-ordering of the words is a slim possibility, as it has happened on Canadian issues before - namely on the 1972 Krieghoff Issue. So it may be a good idea to pay close attention to the ordering and spelling of the French words in the inscriptions especially. 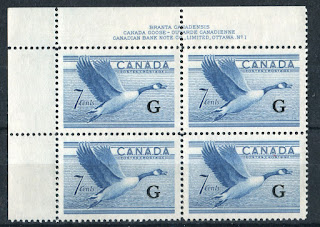 Together, these blocks can be mounted in such a way as to form a miniature sheet of 16 stamps, surrounded by a border that has the inscription in all four corners. I find that this makes a rather appealing display.

The Basic Listing of Plates

The plates listed in Unitrade currently for this issue are as follows:

So there appears to be a few plates that don't exist when intuition says they should:

These could very well exist somewhere and just be waiting to be discovered!

I don't know what the individual quantities are for the official issues, or for each individual plate, but the total number of blocks printed for each regular issue can be determined as follows:

It has to be borne in mind that only a fraction of these blocks will still exist intact. A large number will have been lost to general use, as well as poor storage and mishandling. However, even taking that into account, one can see that overall the plate blocks of this issue are not rare, although there will undoubtedly be scarcer varieties. The other thing to consider is that the above figures are for all plates and all positions. So for example if you assume that all four positions of plates 1-3 are equally common for the 1c, then the above quantity, the number has to be divided by 12 to get the number of possible blocks for each position. This works out to be 140,833 blocks of each position, which starts to look a good deal scarcer, although still not rare.

In yesterday's post I discussed the possible shade, paper, perforation and gum varieties that could exist on this issue and how the number of individually identifiable varieties could number as high as 338. 20 of these are on the coils, so subtracting these leaves 318 varieties. It is of course entirely possible that each of these may exist on several or all of the different plate blocks. It easy to see how the scope of a collection of plate blocks for this issue can expand very quickly. To look at it explicitly, let us repeat yesterday's calculation, modified for the numbers of plates and positions:


This totals to 2,632 potentially different blocks! Of course it is highly unlikely that every shade variety exists on ever paper and on every plate, but you get some idea of how much scope could be involved in forming a collection of plate blocks or full sheets.

Potential Varieties in Addition to Paper, Shade, Perforation and Gum

This flaw is found on all lower left blocks from plate 1 on both the regular issue as well as both the Casson type G overprint and the "flying G"type.

The sheets were guillotined apart along marked cutting guidelines, so the widths of the selvage on the blocks should be more or less constant. Very small discrepancies may be quite common due to the inaccuracy inherent in such an operation. However, large variations of more than 2mm are varieties that are definitely worth studying in more detail.

Occasionally, the plates used by CBN would acquire very fine cracks, which would show up as hairlines in the selvage of the stamps. These varieties have been documented on the two previous issues: The War Issue and the Postes-Postage Issue. However, there are no documented varieties of this kind on this issue, though I feel that they should exist on at least some of the values.

Varieties of the G Overprints

The flying G overprint on the 50c light green is known to exist in a rare fishhook G variety, but this variety has not been found on any other value. The Casson G overprint is known to exist with a truncated crossbar to the "G", so that it has been dubbed the "Blunt G". There are currently no blunt G stamps known on this issue which would exist in plate blocks, so it may be worthwhile to try and seek them out on this issue. There are also possible spacing varieties either horizontally or  vertically with the overprint itself. To the best of my knowledge there has not been a comprehensive study done to check for these varieties.

Occasionally these blocks are found used. I have only seen the low values, though I'm sure that many high value plate blocks exist used as well. Their size makes them ideal for capturing some of the larger cancellations such as barrel CDS's and complete roller cancellations. One could always take on the added challenge of collecting different cancellations on these blocks.

The following is a list of the order numbers on the lower left positions of each value. I will regularly update this post, as I examine more blocks from this issue:

I am beginning to list a small quantity of plate blocks from this issue. To view them, click on the link below:

My next post will deal with the coil stamps and the booklet stamps from this issue.