November 13, 2015
Today's post will deal with the coil stamps of this issue that were in use from 1954 until the Cameo coils replaced them in 1963, as well as the booklets which covered the same period as the coils.

As stated in the earlier post about this issue, there were no English booklets, as all booklets starting with this issue are bilingual. There were also no chewing gum booklets as all booklets were the larger business-card sized 25c booklets. The dotted covers that had been in use since 1935 continued to be used on this issue until 1956, when they were replaced by a new modern design. As we shall see, between cover types, staple lengths, cutting guidelines, paper varieties and shades, there is a considerable amount of scope in collecting the booklets and panes that goes way beyond the basic four booklets that are listed in Unitrade.

There were two dotted cover booklets issued, one containing a pane of 5 plus label of the 5c blue, first issued on July 14, 1954, and one containing a pane of 6 4c violet stamps, issued July 7, 1955. According to Bill McCann in his booklet catalogue, for the 25c blue booklet there were a total of 77,298,000 booklets issued in stapled form and 4,500,000 that were stitched with thread instead of stapled. All of the stitched booklets are in the dotted cover design, whereas the 77,298,000 includes the modern cover design issued in 1956 and in fact, the majority of these booklets will be the later cover design.

The 25c violet booklet is a much scarcer booklet, with only 301,825 being issued. Despite this huge disparity in issue quantities, Unitrade values it at only $4 compared to the $2 assigned to the most common variety of the 25c blue booklet.

Peter Harris in his book on the Dotted Cover Dies has identified two dies used for the front covers and two for the back. Both booklets used the same cover designs, the only difference being the colour of the cover. The scans below show the overall front and back cover designs of the stapled and stitched booklets: 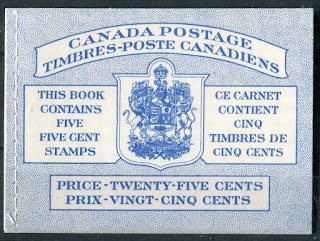 A stitched 25c blue booklet containing 1 pane of 5 plus label of the 5c blue. 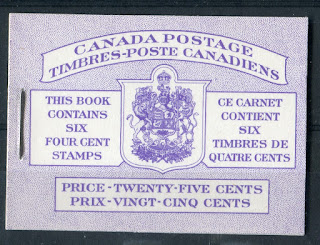 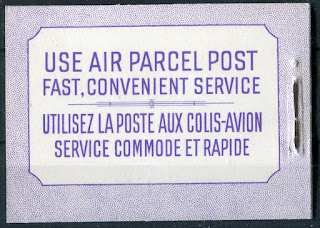 The front and back covers of the stapled booklets.

The following scans show the two dies used for the front covers: 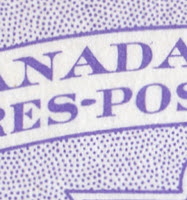 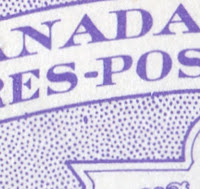 The main difference between these two dies is the shape of the hyphen between the words. On the first type (left)  the hyphen has a tapered, rounded right edge. On the second type (right) the hyphen is squared off on both ends.

The following scans show the two dies used for the back covers: 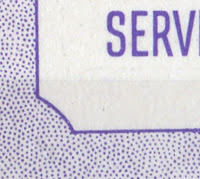 On the left is the first type. Look at the pattern of dots immediately to the left of the diagonal border. You will notice that it looks like a series of intersecting arcs. On the right we have type 2 in which the dots fall along two straight parallel diagonal lines.

According to Harris, all possible combinations of front and back covers exist for two types of stapled 25c blue booklet - one with a 12 mm staple and one with a 17 mm staple. The staple length refers to the length of the visible vertical bar on the front of the booklet. Therefore he lists 12 different possible booklets and states that the 12 mm staple types are all scarce. He lists 4 different types for the 25c purple booklets, which means that if all four types are equally common, then there were only 75,456 of each type issued, which is not very much at all.

McCann also notes that all of the 25c blue booklets exist on horizontal ribbed and smooth papers. There are two fluorescent papers known on the blue booklets, medium and low fluorescent and the purple booklets have been seen with low fluorescent panes. This opens up the possibility of several different types of dull paper. Furthermore, all of these booklets exist with cutting guidelines in the upper or lower left corners. So this means that every single booklet can exist three ways: no guideline, guideline at upper left and guideline at lower right. So that means that there are at least 216 different types of blue booklet and 24 types of purple booklet.

Two areas that have not been studied with these booklets are shade varieties of the blue and purple inks used to print the covers, the fluorescence of the cover stock itself and plate flaws on the covers. careful study of these booklets will likely reveal some significant varieties in this regard.

These booklets were issued in 1956.  There were two basic booklets: 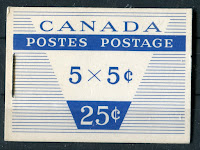 These are the front covers. They were also used for the Cameo Issue. On this issue there are no sub-types known. All of the covers I have examined have a design width of 64 mm or 64.5 mm. There are variations in design width on the next Cameo Issue however. 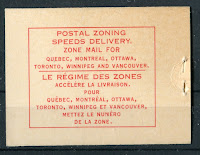 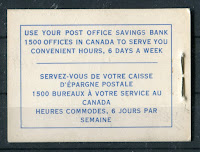 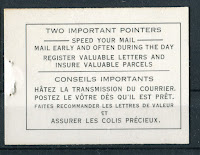 The are the inside front and back covers of the 25c red booklets. The 25c blue booklet has a similar back cover, but instead of two pointers, only the first one, "Speed your mail...." is statedin both English and French.

According to McCann, these booklets with type II cover exist with 12, 14 and 16 mm staples. All of these exist with booth smooth and horizontal ribbed papers, as well as cutting guidelines as before. So there are 6 type II booklets that can exist three ways for a total of 18 type II cover booklets.

According to McCann, the type II covers exist with 12 mm, 14 mm and 16 mm staples. These are very complicated booklets because they contain two panes. The 16 mm stapled panes exist with both smooth dull and ribbed dull papers. Because they contain two panes, the cutting guidelines can appear on either pane or both. So each booklet can exist 7 ways in addition to the two papers, so at least 14 different with 16 mm staple. The same should be the case with the 14 mm staple as well, bringing the total to 28 different booklets.

So there are a total of at least 140 different type II cover booklets that can be collected. All the fluorescent booklets and the booklets with cutting guidelines are all quite scarce.

According to McCann, the type III covers exist only with 16 mm and 12 mm staples. The 16 mm staples are only listed with smooth dull and horizontally ribbed dull paper. So here there are at least 14 different booklets. The 12 mm staples appear to exist with smooth dull, low and medium fluorescence for a total of 9 possible combinations, which becomes 63 different when possible cutting guidelines are taken into account.

So all told there are at least 77 different type III cover booklets possible and 140 type II for a total of 217 different red booklets.

Not nearly as straight forward as first appears huh?

Then of course, you can challenge yourself by looking for the individual booklet panes in fine or very fine used condition with in-period cancellations, which is not nearly as easy as you might think, though they do exist.

The coil stamps are another very complicated aspect of this set. As explained in the post dealing with the Karsh Issue, the following varieties exist with all Canadian coil issues:

So before we even get into paper, shade or plate varieties, there are 12 different collectible strip varieties for each of the three values, for a total of 36 different strips.

However, it is not this simple.

All three values exist with a constant plate flaw called the "damaged E", which is shown in a 4c jump strip and close up as follows:

As you can see the E on the right isn't really damaged, just blurred. But that is what Unitrade calls the variety.

In addition to this, the 2c exists on fluorescent paper, which is generally a dull paper with a sparse concentration of low fluorescent fibres. The 4c is listed on hibrite paper, but the ones I have seen are really just low to medium fluorescent. All of them appear to exist on three kinds of dull paper: smooth with no mesh, vertical ribbed as shown here and horizontal wove. Finally at least 2 shades of each value exist. So there are an additional ten varieties of 2c, an additional 10 of the 4c and 8 varieties of the 5c. When you combine those varieties with the 12 strip varieties above, the potential scope becomes:

So a person focusing on these coils could potentially collect at least 336 different coil strips!

As these coils were intended to pay the rates on third class, local first class and domestic letters, it is unusual to find used strips, especially on cover. So a rewarding pursuit would be to seek out used pairs and strips with nice, in-period CDS cancels.

The next post will deal with the Cello-Paqs and the official stamps.

Have a great weekend everyone!