The Wilding Issue of 1954-1967 and My Facebook Page Pristine Canadian and British West African Stamps is Now Launched! 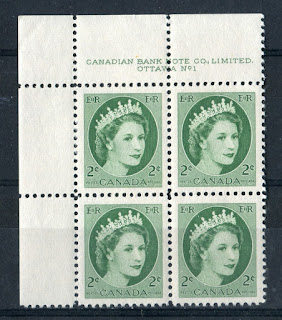 Now that I have completed my series of detailed posts about the 1953-1967 Karsh Issue, I should hopefully be ready to start posting about the next series which was in use from 1954-1967. This issue is called the Wilding Issue, and it is much more complicated than the Karsh Issue.  I expect that my posts will be spread out over several days as follows:

Given that there were a staggering 20 plates used to print some of the stamps from this issue, I might have to spread the post dealing with the plate blocks over two posts.

I have now finally implemented my Facebook page, where you can find all of my past posts in my timeline, which makes finding them a bit easier than trying to navigate the blog. I will add each new post for both my stamp blogs to the timeline. The link for my page is:

Today, I will be adding all of my past posts to the timeline.

Have a great weekend, and I'll be back on Monday with my overview post of the Wilding Issue.