October 24, 2016
Today's post will look at the remaining aspects of the Medallion Issue of stamps that appeared between 1932 and 1935.

All of the stamps of this issue exist in imperforate pairs, like the one shown above. They are all extremely scarce, with only 150 being produced of the low values, 100 of the 13c and 75 of the 20c. In fact, these numbers are lower than the issues that pre-date this and are much more expensive. For this reason, I believe that they will prove to have been a very smart investment to any collector with the foresight to acquire them now, while they are less than $1,000 per pair. In fact, lightly hinged pairs of the low values can be had for as little as $350, which is a pittance for anything this scarce. The 3c value can be found in both dies 1 and 2, with the die 2 being found only as a flat plate printing, and being the rarest and most valuable of all the imperforate pairs. It currently lists in Unitrade at $3,750 in VFNH condition. 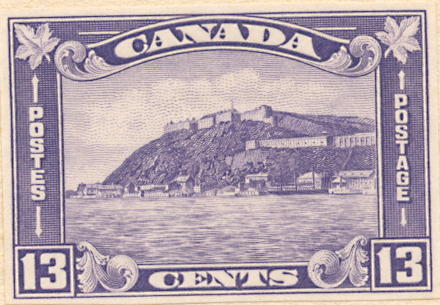 The quantity of proofs known for this issue is much lower than for other issues, and the proofs themselves are more expensive, being valued in the $2,000 range for most pieces. Some of the lithographed essays can be purchased for much less - $300-$600 - that is, if you can find them at auction. The BNA Proofs website lists 17 different items, and you can see the full descriptions by accessing the following link:

Generally speaking the proof material can be broken down into three main categories:

1. Photographic essays in black and red of the 1 cent value.
2. Lithographed proofs of the 1c and 2c designs in black for use in production of the postcards.
3. Stamp sized die proofs in the issued colours, many of which are dated.

What is interesting about the 3c proofs is that the dates on them show that die 1 was approved a full 7 months before die 2. However in the sequence of plates used, the first two are die 1, while the last 10 are die 2.

This is the first Canadian definitive issue for which the first day covers are very affordable. Most are quite plain, with either no cachet, or very simple cachets as shown on the 4c cover above. However, it is possible to form and interesting and varied collection of these, for not much more than $20-$50 per cover, as compared to several hundred dollars per cover for the Arch issue. 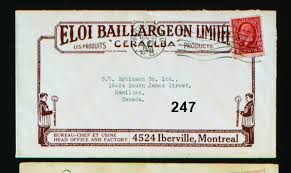 Although the most ornate advertising covers made their appearance in the late Victorian period, there are some very visually appealing covers available to collect during this period. My favourites are those from hotels such as the one shown below. These hotels often had very attractive pre-printed stationery showing engraved vignettes of the hotel and in clean condition, they make a very attractive display indeed. The best part about both these types of covers is that they can still be found in large cover lots and can be bought individually for much, much less than comparable covers from the earlier period. The Art-Deco style is of course much more modern, but it is becoming ever more popular with the passage of time. So now may just be the time to acquire the better and more attractive items, as they are unlikely to remain as inexpensive as they currently are.

The 1c, 2c 3c and 5c values of this set are all known pre-cancelled. The only coil stamp known precancelled is the 1c dark green, and it is only found with one style: the three sets of parallel horizontal bars. The 5c is also only known with one style. However, the 1c can be found with 70 different styles, the 2c can be found with 29 styles and the 3c can be found with up to 7 styles. It should be pointed out that this does not mean that there are only 70 types of precancels of the 1c. In fact there are many hundreds, as one style may have been customized for different Canadian cities, so that there may be dozens or hundreds of different precancels that for just one style. Furthermore, many of the precancels are known doubled, tripled, inverted etc. The Walburn specialized catalogue of Canadian precanels gives a complete listing of all the different known types of precancels that can be found on the stamps of this issue. 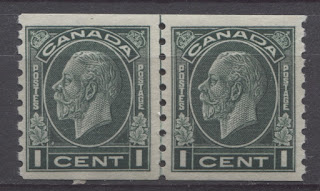 The coil stamps of this issue are some of the scarcest issued in the modern era. There are relatively few listed varieties, with the line pairs being the only listed variants, which are listed on each of the three values at a slight premium over the price of a regular pair. The above scan shows an example of a line pair of the 1c value. There was often a jump in the spacing at the line, so that I believe it i possible to also collect jump strips or jump pairs as well. I have not seen any significant variation in the spacing of the stamp impressions. However, given that nearly all of the coil stamps printed by the Canadian Bank Note Company (CBN) exist with narrow and wide spacing varieties, it is reasonable to believe that such varieties exist on these coil stamps as well, even though they were printed by a completely different firm.

Unitrade lists start and end strips for these, but notes that they are scarce and only lists them as strips of 4, being 2 stamps plus 2 tabs. However, it should be possible to find complete strips with all 10 start ad end tabs. They are quite expensive, being worth a minimum of $100 - 4 times the price of the basic stamps contained in them.

This issue is the second last one to be found with the five hole OHMS perfin shown above. The term 5-hole refers to the number of holes in the vertical bars of the H. All eight values can be found so perforated and like all the other 5-hole OHMS issues, they are expensive, with a basic VF used set costing upwards of $1,200.

As I have stated in previous posts, the pattern shown above should theoretically exist in up to eight different orientations:

I do not know whether every single one of the 8 different values exist with all 8 orientations. However, it would be a very rewarding and challenging exercise to seek out all 64 possible stamps in the best available condition (8 stamps in 8 different positions)

There is a fairly decent range of postal stationery for this issue, through it is not as extensive as the earlier Arch Issue. Unitrade gives a very simplified listing of the envelopes, special order envelopes, post bands, wrappers, and post cards. However, it is possible to find variations in the shades of the inks used to print the items, as well as errors in the makeup of the envelopes that are not listed. Webb's specialized catalogue of Canadian postal stationery provides a comprehensive listing of all known and documented varieties of postal stationery from this issue.

The basic varieties of postal stationery can be summarized as follows:

A worthy challenge for the specialist of this issue is to try to find a commercially used example of each of the above, from each major Canadian city, used in the proper period. It will likely prove to be a lot more challenging than you might think.

This concludes my discussion of this issue. My next posts will look at the two postage due issues that appeared between 1930 and 1935.