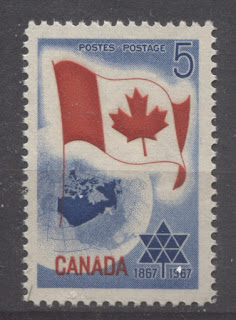 Today's post marks the first in a new series - one that will explore the intricacies of the commemorative stamps that were issued between 1967 and 1972, just before the next definitive issue, the Caricature issue appeared. I have elected to keep each post restricted to the stamps of just one year, so I anticipate that this series will consist of six posts.
The commemorative issues are often overlooked by specialists who think that since they were only issued for a brief period of time, and because they are aimed at collectors, that there is nothing interesting to study about them. I wholeheartedly disagree. For one thing they serve as important time markers for the various changes that the post office adopted in terms of paper, perforation, gum, ink and tagging. By carefully studying these changes in the commemorative stamps and being familiar with the dates, you form a basis against which to study the same changes that you encounter in the definitive stamps of the same period. Thus, the commemorative stamps are a very important tool to the study of the definitive sets. Perhaps they may even be the most important tool of all.
In studying these stamps closely we come to see that there are 11 different varieties of paper, ignoring fluorescence, four line perforations, and seven types of dextrine gum. Some of these are found on only one stamp, while others are found on nearly all the issues for the year. Some appear in a narrow 2 or 3 month period in 1967. Because of this, we can use the information we learn about the paper and gum types and when they appeared to draw conclusions about the 1967-1973 Centennial definitives and can likely assign at least some of the early printings to specific months in 1967.
Please click on the following link to read the full post:
https://brixtonchrome.com/blogs/canadian-stamps-and-postal-history/the-commemorative-stamps-of-1967
1967 Commmemoratives