January 18, 2016
This is the first issue of Canada in which we begin to see cracked plate varieties. I am not sure why they do not appear on the earlier issues, since the printing plates were made from soft steel on these earlier issues as well. However, I do believe that it may have something to do with the fact that the plates were often bent and wrapped around steel cylinders prior to printing. I vaguely recall a very detailed explanation in Marler's book on this issue and the subsequent Admiral issue explaining how the printings were made in detail that touched on this.

In any event, on this, the 1908 Quebec Tercentenary Issue and the Admiral issue, as well as some later issues printed by the Canadian Bank Note Company, fine cracks developed in the plates that absorbed some of the ink, which got transferred onto the printed image in the form of fine lines that run horizontally across the stamps. Collectors have referred to these as "hairlines". Typical examples look like this: 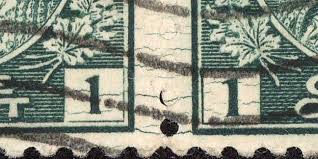 The above stamps are from the 1911-1928 Admiral issue, but the hairlines on this issue look much the same as this. They are only found on the 1c and 2c values, presumably because these were the only stamps to be produced in a manner that required the plates to be bent around a cylinder to facilitate the production of such vast quantities of stamps. Similarly, one only sees these on the 1c and 2c values of the 1908 Quebec Tercentenary issue, and the 1c green and 2c carmine Admiral issues, presumably for the exact same reasons.

The strength of the hairlines varies, with the above illustration being an example of strong hairlines. They can be quite a bit weaker than this, requiring a loupe to see clearly. The standard stamp catalogues do not clearly stipulate what the strength of the lines has to be to qualify as the "hairlines", but where there is a significant premium in price, I would suspect that you should be able to see the lines clearly without magnification. Weaker examples would merely be variations of the regular stamp, still worth some premium, but just not as much as the separately listed "hairlines" varieties.

Later issues after the Admirals can appear with jagged irregular lines in the selvage of plate blocks. I have seen this on stamps of the War Issue, Postes-Postage and Wilding Issues. In these cases, these cracks are not caused in the same manner as this issue, and consequently the cracks are isolated in nature and appear in random places, usually outside the printing area.