January 27, 2016
This is my last post dealing with this fascinating first issue of the 20th century. However, the last two aspects that I am going to talk about today are some of the most challenging for even the most advanced collectors of this issue: the proofs, essays and plate multiples. 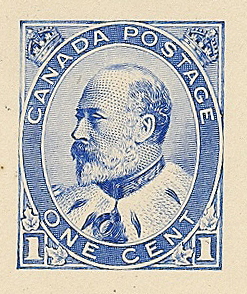 This issue has one of the more extensive lists of proof material that I have seen on a BNA issue, and the BNA proofs website does an excellent job of listing and pricing them all. I am not going to re-produce all of their work here, but rather I will summarize it and give you the link to their page, where you can check out their listings for yourself:

As is the case for most proof material, there are only between 1 and 4 reported examples of nearly everything listed on the BNA proofs website and nearly all of the 56 separate items listed sell for upwards of $2,000 each. There are a few proofs that are listed for between $300-$500, but by and large, collecting the proofs of this issue will be a challenging and expensive task.

The material listed on the BNA proofs website for this issue falls into four major categories:

It is interesting that De La Rue would have produced trade sample essays for this design, given that they were never awarded any contracts to print Canadian stamps. I know nothing about the circumstances of their production - whether the design originated with them, or whether they appropriated the design for their own use after the fact.

The essays contain the same Downey portrait of Edward VII in a different frame from the issued stamp. The website lists five different essays, in various colours, one of which is on watermarked paper, and of which two are known of each. They state their value as being between $1,200 and $2,500 each.

Essays of the Issued Design

This material comprises 22 items and is the largest section of the material listed on BNA proofs website for this issue. The essays generally resemble the issued stamps, but are printed in completely different colours and either have colourless numerals, where the numerals on the issued stamps were a solid colour, or the maple leaves above the numerals are not fully shaded. These essays can be further subdivided into seven groups:

Again, the existence of the Perkins Bacon essays is curious given that Perkins Bacon was never awarded contracts to print any Canadian stamps, although they were often involved in the production of many issues of Newfoundland.

Trial Colour Proofs of the Issued Stamps and Progressive Proofs

Die Proofs of the Issued Stamps 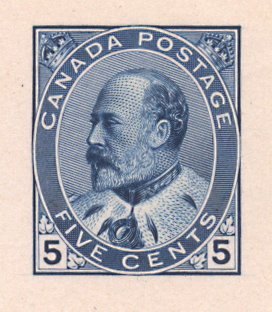 These comprise the last 13 items listed on the BNA proofs website. All denominations are represented with between 1 and 3 different proof items each. They range in price between $1,800 and $9,000, with most items being in the $3,000 range. The dated large die proofs are the most expensive at $9,000 each. They are generally all printed in the issued colours with two notable exceptions:

This is perhaps the most challenging aspect of this issue, due to the sheer number of plates that were used to print the 1c and 2c values, the poor centering found on this issue and the fact that many of these large multiples like the ones shown above will not exist now because they will have been split up by collectors and dealers.

The above image shows the top portion of a sheet of 7c olive bistre stamps from plate 2. If you look to the right of the number 2, you can see the number "90", and to the right of it there appear to be three sets of numbers, each of which has been obliterated. These are the print order numbers, which is just another way of saying the print runs. Each time a batch of stamps was printed, it was a different print order and had its own unique order. After an order had been run, the order number was struck from the plate, the plate was inspected for wear and worn impressions were re-worked, by re-applying the transfer roll to the plate. This of course is where we get misplaced entries and re-entries. What these numbers indicate is that plate 2 was used at least 4 times - it could have been more, and if it was more, we would see another block with the "90" struck out and a new number entered.

The most extensive collection of these blocks ever to come on the market was sold by Ron Brigham last year. I will provide the link to the downloaded catalogue and will summarize below what was contained in that sale:

So 39 plates out of at least 72 were in his colection. Most of these are strips and most were only still intact because they were not well centered.

Again, 41 out of at least 86 different plates, so less than half of what was originally printed.

So only 6 multiples here, although it appears that all plates may have been represented. However, all of these multiples were off centre to some extent.

Sold in larger blocks: 2 (the above shown)

I don't know how many plates there were of the 7c, but I imagine that there must have been more than two. In any event, Mr. Brigham did not have any multiples of plate 1, which was surprising to say the least.

So there you have it: a summary of all the plate multiples that were in the Brigham collection. Judging from the low print quantities of the 20c and 50c values, it is unlikely that more than 1 plate was needed, so he probably had all the plates covered for the 10c, 20c and 50c values. However, there were significant holes in the sequences for the other values. What is striking also is how few large  blocks of 8 or greater there were: most were off-centre strips from the top of the plate. Mr. Brigham was the most prominent philatelist of the late 20th century for Canada and while he may have missed some of the items that exist out there, this list is a pretty good indicator of what likely exists for this issue and highlights the scarcity of the material.