Generally speaking, this issue can be found with paper that shows either:

1. Very clear mesh on the back that is coarse.
2. Mesh that is not as clear as above, but is still visible when the stamp is viewed face down on a surface.
3. Paper that shows no clear mesh pattern unless the stamp is held up to a strong light source, when the mesh becomes visible.

Each of these types is found on most all values of the set.

In addition to these variations in weave, there is also variation in colour:

3. On some printings of the 1c, 2c and 7c made between about 1905 and 1907, there was a toned paper used. I have considered the possibility that this is simply white paper that has been affected by age or by reaction with the gum. However, I am inclined not to believe that this is the case after seeing several postcards in pristine, fresh condition with stamps affixed that are on this toned paper. To me this is significant because the gum in this case has already been moistened, activated, bonded and dried over 100 years ago, so it does not seem that it would continue to react with the paper significantly. Secondly, I have seen many used examples that show the toned paper colour, even though they were soaked and the gum removed decades ago. My dates above are pure conjecture and based simply on the postmark dates I have seen on the used stamps I have encountered on this paper.

4. The 5c value is the only value found on bluish paper. The blue colour varies from a very light blue, to light blue, to greyish blue to greenish blue. The very lightest of these blues is almost white and it is what Unitrade refers to as the "whiter paper".

The toned and greyish papers are generally found with either coarse or fine vertical mesh showing through on the back and mint stamps generally will have either cream coloured gum with a satin sheen, or yellowish shiny gum. The gum on the bluish paper stamps is generally always yellowish and this is apparent from the fact that the paper colour of mint stamps appears greenish from the back, rather than blue.

For the white paper with no visible mesh, the gum is a smooth cream that has the appearance of being "sponged on", as it has a satin, semi-gloss sheen, rather than being shiny. We see this type of gum on the previous Numeral issue, and we will encounter it again on the post World War 1 wet printings of the Admiral Issue stamps.

I will now illustrate some examples of the above variations on each value. The gum on all stamps shown is 100% original and shows that there is considerable variation in the appearance of the gum on this issue. 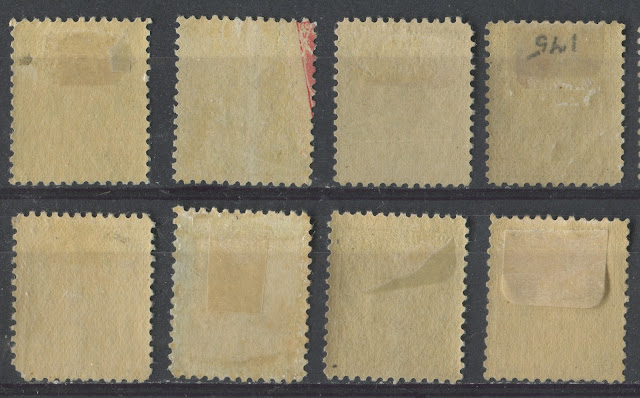 The above scan shows some of the gums that can be found on this value. The first two stamps in the top row, the right stamp in the top row, and the bottom left stamp are all on the coarse mesh paper, and in each case the gum is either a yellowish shiny gum (bottom left and upper right stamps), or is a yellowish satin gum. The third stamp on the top row and the second stamp from the left on the bottom are on paper showing no clear mesh. In both cases it is the "sponged on"cream gum described above. The third stamp from the left on the bottom row is the greyish paper, with coarse mesh and it has shiny yellowish cream gum. Finally, the lower right stamp is the toned paper showing fine mesh. In this case the gum is clearly a creamy colour and is not really shiny, being more satin in sheen.

It is difficult to see in the above scan, but the stamp at left has coarse mesh and the second stamp from the left has fine vertical mesh. The two stamps at the right have no clear mesh unless held up to a strong light source. The gum on the first two stamps is shiny yellowish cream. The gum on the third stamp is the "sponged on" cream gum described  above, and the right stamp has cream satin gum, as the lower right stamp on the 1c above. 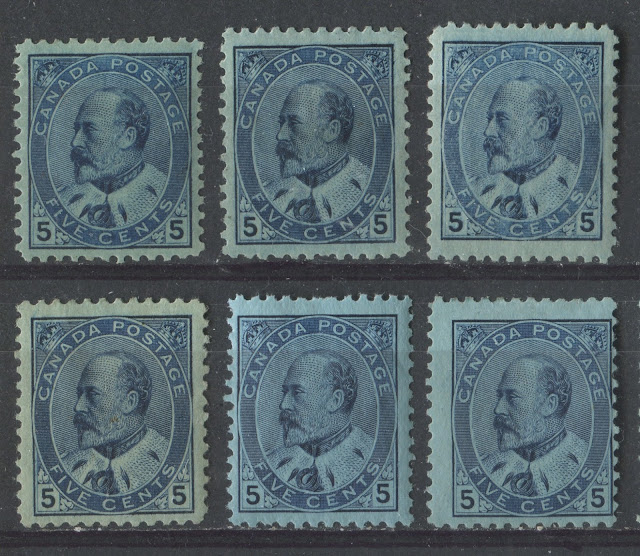 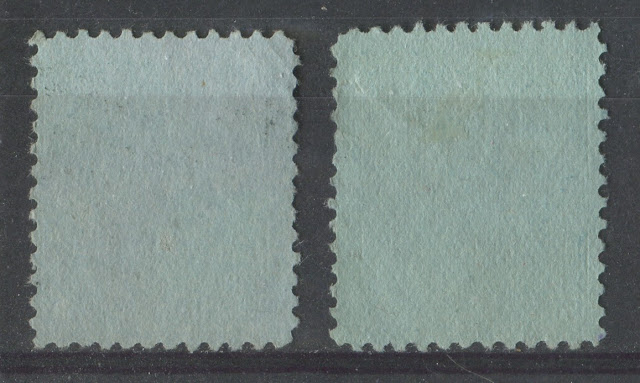 The scan above shows the gum on several mint stamos and the smooth no-mesh paper on the used stamp second from left. The fourth stamp from the left is on the toned paper and has the cream satin gum described above on the 1c and 2c. The others are mostly the fine mesh papers with yellowish cream shiny gum. The stamp at right has no clear mesh and the "sponged on" cream gum described above.

The left stamp has the fine mesh, as does the centre stamp on toned paper. The stamp on the right has the coarse mesh. 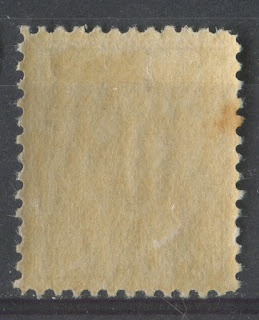 The above scan shows the shiny yellowish cream gum on the white paper with the fine vertical mesh. 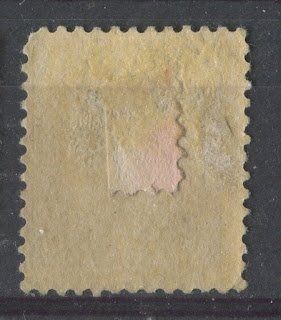 This scan above shows a 10c on white paper with no visible mesh, that once again has the "sponged on" cream gum. 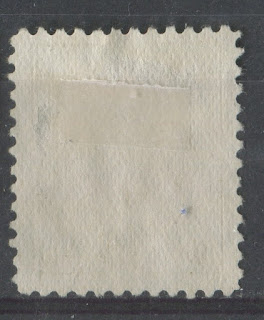 A used white paper example with the coarse vertical mesh. 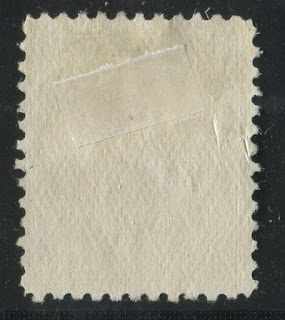 The above scan shows a used deep greyish olive green on white paper with the coarse vertical mesh. 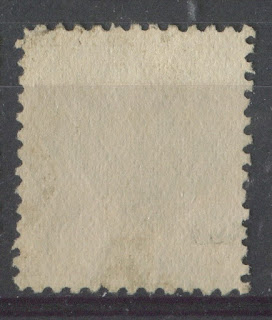 A used example of a stamp printed in the same shade of olive green, but with the finer mesh. 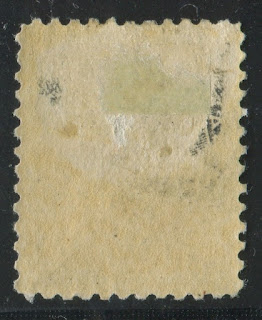 A mint example of the deep olive green on paper showing no mesh that has the "sponged on" cream gum that we would expect to see on this paper. 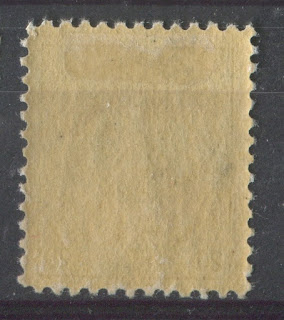 Finally an example of the bright olive green on paper with fine vertical mesh and shiny yellowish gum. 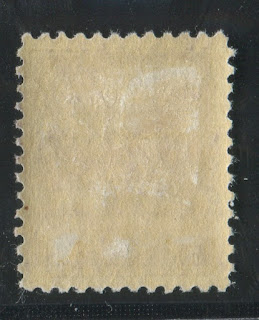 Unfortunately I now only have one example of the 50c value. The above stamp is the deep bright purple on soft wove paper with fine mesh and has the shiny yellowish cream gum.

Hopefully after reading this post and looking at the scans you will agree that there are definite differences in the paper and gum that are significant because they follow distinct patterns across the values of the set. I would be interested to hear your comments and thoughts on this topic. Do you think these differences are collectible? Or am I going overboard here?