The Die Types On The Admiral Issue

March 07, 2016
One topic that I need to deal with before I get into the detailed posts about colour on the Admiral Issue are the various die types that were used to print the stamps of this issue. Over the years different terminology has been used to describe these die type differences, while others have been more or less ignored by the standard catalogues. This post will discuss only those type differences that are dealt with in the standard specialized catalogues such as Unitrade. In later posts, where it is important to understand the topic at hand, I will refer to some of those die type differences that are only referred to in specialized works.

The die type differences that are listed in Unitrade fall into two main groups:

1. The die 1 and die 2 on the 1c orange yellow and 3c carmine, and
2. The original, re-touched, and re-drawn framelines.

The Die Types of the 1c Orange Yellow and 3c Carmine

The second colours of the 1c and 3c are the only stamps in the series that have a die 1 and die 2 version that most collectors have become aware of. Why this is the case, is somewhat of a mystery, and I wonder whether further study will reveal similar differences on at least some of the other values in the series.

Each of these stamps, and each die type exhibits several characteristics. Each collector tends to rely on one or two of these for identification, depending on which one they are most able to recognize. I find however, particularly when dealing with the 1926 surcharges, or used stamps that it pays to know, and be able to recognize all of them, just in case one or more of the characteristics is obscured by a cancellation of overprint. 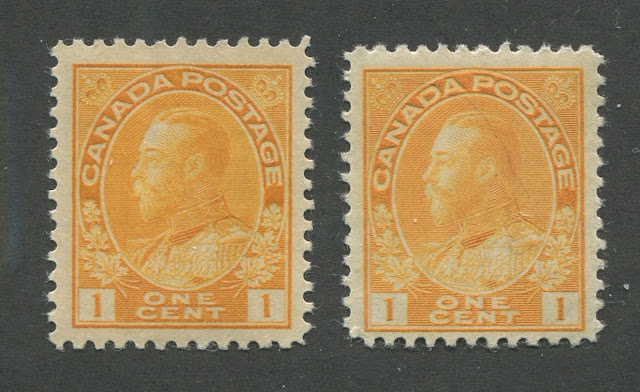 The stamp on the left is die 1, while the stamp on the right is die 2. In this case, the difference between the stamps is further highlighted by the fact that the die 1 stamp is a wet printing, while the die 2 stamp is a dry printing. Can you see how much sharper the printing is on the right stamp, the dry printing? The differences are a little hard to see on this scan, so lets look at close ups of the relevant areas of each stamp:

Ok, there are two characteristics that I look at to distinguish these two dies:

1. On which line of horizontal shading the bottom of the "T" of "Cents" rests.
2. Whether the serifs at the base of the 1 are pronounced, or truncated.

The first characteristic is very objective and binary, so it is easy to work with for individual stamps. The second characteristic is relative in the sense that a value judgement is required to determine whether or not you think the serifs at the base of the 1 are pronounced or not. This can be difficult to judge unless you have seen both types.

On die 1 the bottom of the "T" of "cents" rests clearly on the second horizontal shading line up from the bottom of the stamp. The serifs at the base of the 1 are considered to be not pronounced, with the base of the 1 being almost straight. You may feel that the serifs are actually quite pronounced based on how they appear in the above scan, but I think you will change your mind when you compare how they look here, to how they look on die 2.

A third characteristic to note as well is that there is a full horizontal shading line between the top of the "N" of "One" and the bottom of the oval surrounding the portrait.

There isn't a huge price difference between most stamps in either die 1 or 2, either on the coils, or the sheet stamps. However, one stamp that is expensive and keenly sought after is the dry printing version of die 1, so being able to distinguish both the dies and the wet and dry printings will prove invaluable. Remember: all the die 2's are less expensive varieties, whereas die 1 can be expensive if it is a dry printing, or if it is one of the better shades, such as the lemon yellow. 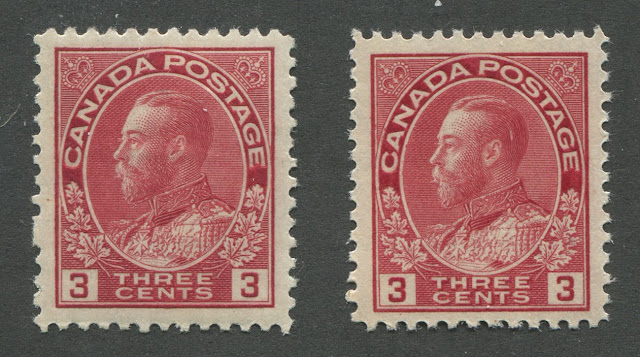 The stamp on the left is die 1, while that on the right is die 2. Again, the differences can be difficult to spot on this scan, so we will look at close up scans of each stamp:

On this stamp, there are three characteristics to consider. Unitrade identifies all of them, but I don't like the way they explain them, as I find their explanations a bit misleading:

1. The top stem of the maple leaves to the left of "Three" will either be of uniform thickness and will simply end, with no thickening at the point where it ends.

2. Three horizontal dashes of colour can be found directly above each of the two "E"'s of "Three".

1. The top stem of the maple leaves to the left of "Three" starts off thin at the top and gradually thickens down its length, ending in a small white blob at the end. Consequently, it appears somewhat shorter than the top stem in die 1.

2. While there are still horizontal dashes present above both "E's"of "Three", they no longer appear as three clear dashes above each letter. Unitrade's explanation is that they are not aligned with the tops of the "E", which is a bit lacking as an explanation because they are aligned in the horizontal direction. I think what Unitrade means to say is that the ends of the dashes to not align with the ends of the top bar to the "E's" in the way that they do on die 1.

3. Finally, the bottom horizontal line of the king's uniform clearly joins the diagonal line of colour at the right.

It is this last characteristic I find that most collectors look at when trying to identify this stamp, as it is very obvious. However, on the 1926 surcharges, this part of the design is often obscured by the surcharge, making identification difficult.

The identification of the dies on this stamp is very important, as Die 2 is much, much scarcer than die 1. In fact, I would wager that out of 100 mint stamps of the 3c carmine, at least 80 of them are likely to be die 1, while 20 or less will be die 2. Most of the die 2's were used to produce the 1931 provisional that was perforated 12 x 8. The reason is that the War Tax was abolished in 1926, which reduced the local first class postage rate from 3c to 2c, which basically made all the 3c stamps redundant. So most of the die 2's were withdrawn and kept in storage by the Post Office Department, rather than being destroyed. A few sheets were surcharged with the one-line "Two Cents" surcharge, but these are also rare.  For some reason Unitrade lists used examples of die 2 at the same cheap price as die 1, which in light of what I have just written does not make a whole lot of sense to me, as they are clearly scarcer than die 1.

The Re-Touched and Re-Drawn Framelines

The original dies for all values had an upper right spandrel that looked like this: 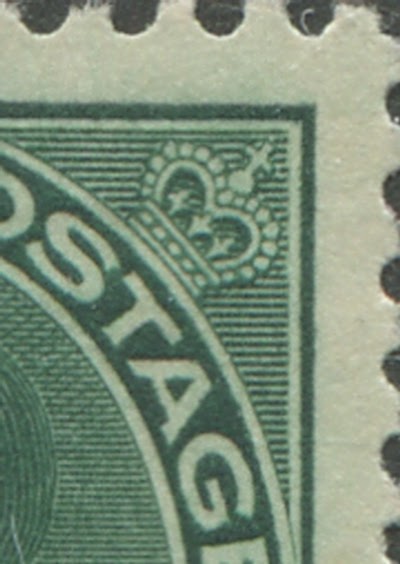 If you look closely, you can see that the heavy horizontal green lines end abruptly and there is no vertical line joining them all, which makes them look somewhat haphazard, as though their end points are all slightly out of alignment. Can you see that? This is the original die that was used for most values up to the early 1920's. Most stamps that you come across that look like this will have been printed earlier than 1920. This will prove to be helpful when you are trying to identify some of the shade groups that are listed and priced in Unitrade, for as we shall see, when Unitrade lists a shade group, what they are really listing are different scarcities in groups of printings. They almost always place a date next to the shade group they are listing, so for many of the groups, being able to identify this original die will be an aid in supporting your decision to assign a shade to one of the earlier groups.

Later, as the 1920's approached, the dies were re-worked and on nearly all subjects, a vertical line was added to the upper right spandrels like this: 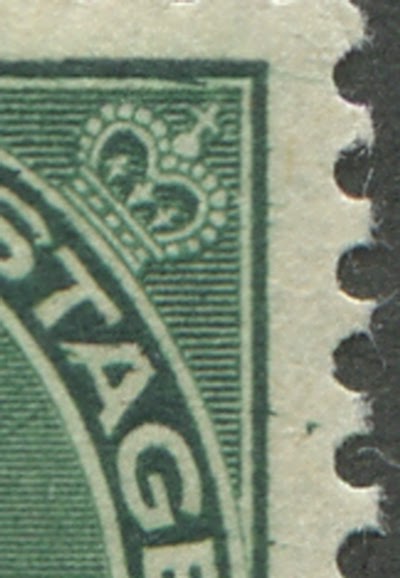 Here you can see that a very clear vertical line has been added that joins all the horizontal lines. However the line is not particularly strong. Here it is again on the wet printing of the 1c yellow-orange: 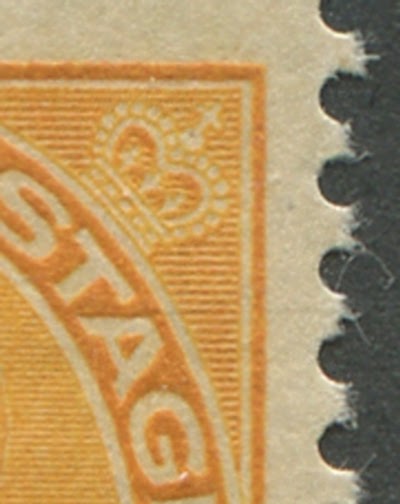 Shortly after the printing method was changed from the wet process to the dry one, new plates were produced for most values that were nickel-chromium plated. On these plates, the vertical line in the upper right and upper left spandrels was re-drawn and strengthened considerably, resulting in a very clear and thick vertical line. Here is an example on the 1c orange-yellow die 2 dry printing: 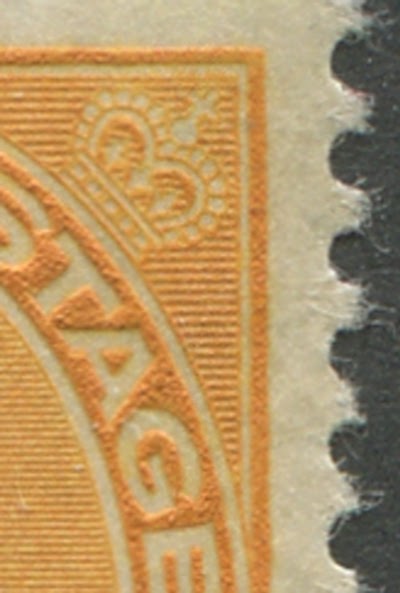 And then an example on the 3c carmine die 2: 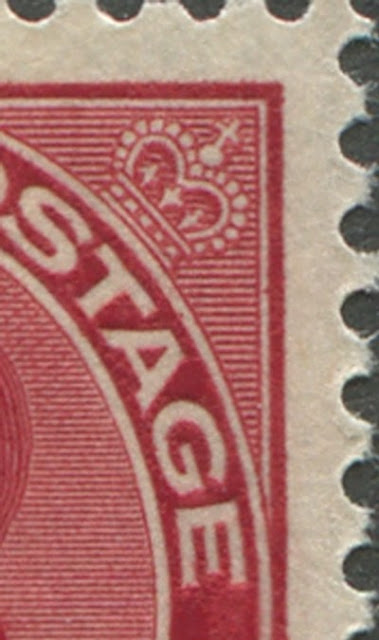 That concludes my review of the die type differences. My next post will dive right into the shade varieties of the 1c green.