Unitrade's treatment of shades on this stamp is practically non-existent, with only three shades being listed for the sheet stamps: brown, yellow-brown and dark brown. For the coil stamps and the War Tax stamps there are only two listed shades: brown and yellow brown. In reality this stamp has at least as many shades as most other stamps in the set, and although there is some overlap, the shades found on the War Tax stamp, which was issued over a year earlier, are completely different from those found on the regular issue postage stamps. In addition, as we shall see, the Unitrade listed brown shade on the wet printings, is different from the shade found on the dry printings, even though Unitrade calls both "brown"

Yellow-brown is another shade name bandied about quite a lot in Canadian philately and while these browns do contain a hint of yellow, many do not match the yellow-brown swatch in the Gibbons Colour Key. This issue is no exception, with no stamp matching the yellow-brown swatch in the Gibbons' colour key, exactly, though some of the coils do come close, being much deeper. However, all of the stamps that are correctly assigned to this shade will appear yellowish compared to the other shade groups.

As with all my other posts on shades, I will illustrate each shade group as it is named in Unitrade and then cross reference to the corresponding swatch on the Stanley Gibbons Colour Key.

The above three stamps are all examples of what Unitrade calls brown. In terms of the Gibbons Colour Key, we have from left to right:

So Unitrade's brown for the sheet stamps is really varying shades of deep brown.

Booklet Pane of 4 Plus 2 Labels 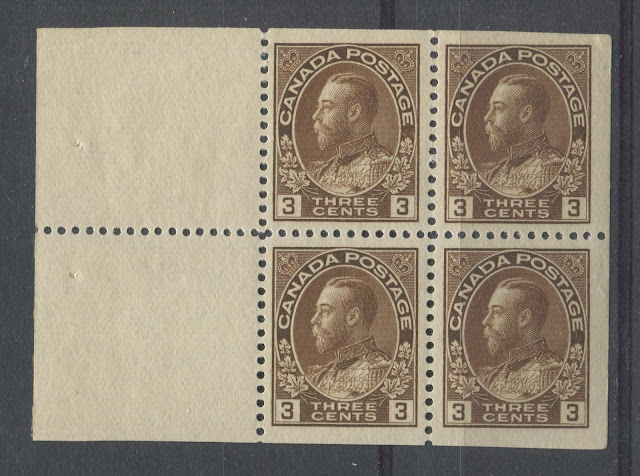 The booklet panes are only described in Unitrade as "brown". However, you should be able to see that the colour of the pane shown here is both lighter and redder than the brown shades in the first group above. This is actually closest to the light brown swatch on the Gibbons Colour Key.

These three stamps are also classified as brown by Unitrade. While they are very close to the shades in the first group, you will notice, if you compare the two carefully that these shades are both paler and duller than those in the wet printing group.

Again these stamps are all varying degrees of deep brown.

The above coils are all examples of Unitrade's brown. This coil is only printed by the wet method, which is an aid to identifying fake coils made by cutting dry printing examples. Unitrade does list a yellow brown, but unfortunately I do not have an example of the yellow brown coil in stock at the moment. However, I will add one when one becomes available.

Once again, these are all varying degrees of deep brown. 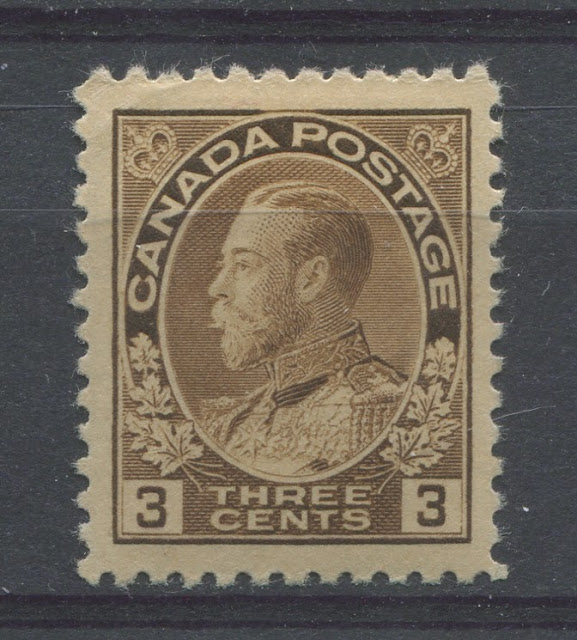 This is an example of the Unitrade yellow brown. It actually is more of an umber brown than a yellow brown. However, as you can see, it is quite distinct. In terms of the Gibbons Colour Key, this is closest the deep brown swatch, but is much duller. 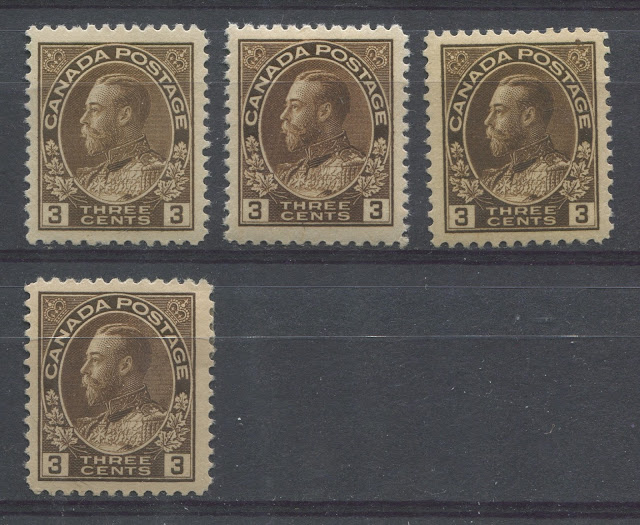 Unitrade only lists the dark brown shade in the wet printings. I believe that all the above are examples of this shade group. The top stamps do all have some yellow to them, but I do not believe that they are quite what Unitrade meant, when they say "yellow-brown" because they are too common, and the yellow brown shade in Unitrade is a premium shade. 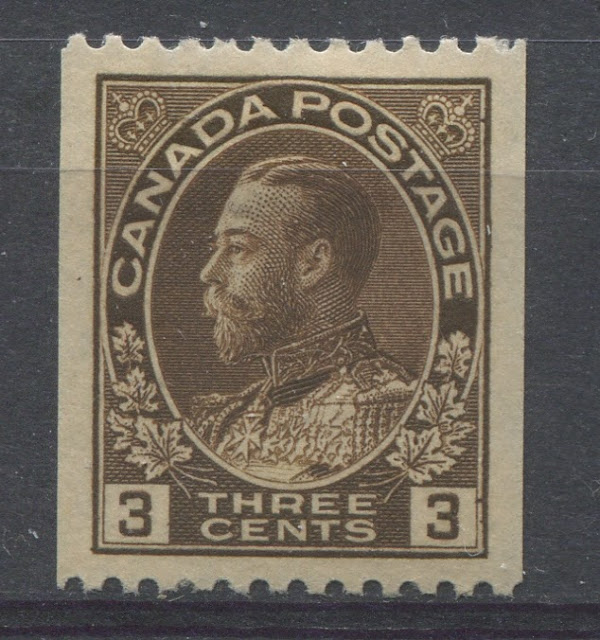 This coil is only listed in Unitrade as brown, when in actual fact this is one of the deepest brown shades you will encounter. I have not seen any significant variation in shade on this stamp, with all the coil stamps that I have handled, looking very much like the one above. In terms of Gibbons'  Colour Key, this one is closest to the deep brown swatch, but is slightly deeper. So I call this one very deep brown. 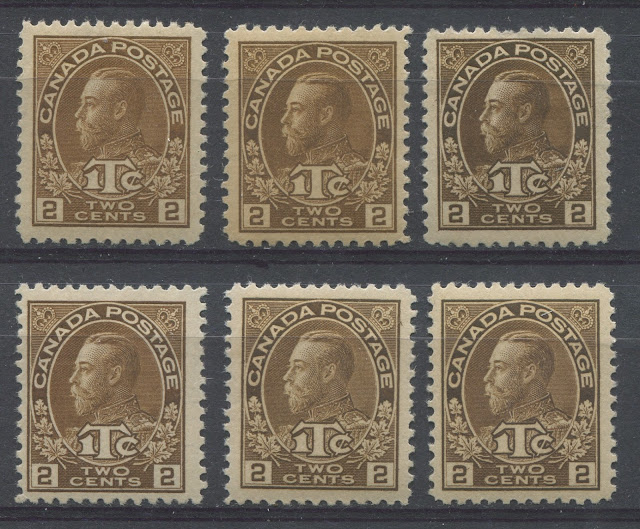 Unitrade only lists the sheet stamps as either brown or yellow brown. As you can see from the above scan there is a range of shades on this stamp that is quite a bit wider than the regular issue sheet stamp, with shades that are not only paler, but which incorporate an element of bistre to the brown as well. There is some clear overlap, with some shades being very similar to the yellow brown and deep brown groups above however.

In terms of the Gibbons Colour Key we have from left to right on each row:

A collector sorting the above by Unitrade would probably call the first two stamps yellow brown and classify everything else as brown. However, this would not be consistent with the sheet stamp classification above. If you were being consistent with the sheet stamps, then only the yellowish sepia would come close to the yellow brown group above. The others are all closest to the dark brown group, except for the first two shades which are entirely in their own league.

In terms of the Gibbons Colour Key we have from left to right: