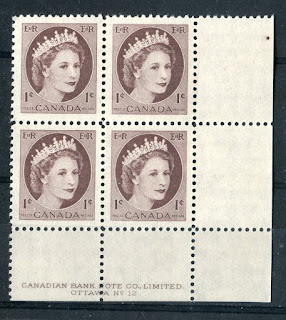 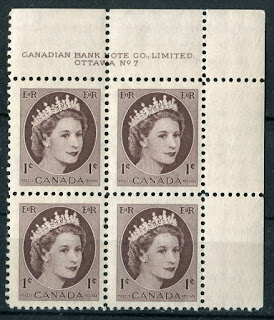 As promised, I have a clear afternoon on this Boxing Day to sit and write some posts summarizing some of my additional observations that have come from working with over 1,200 items from this series over the past month. It is no exaggeration to say that this issue really is the modern equivalent of the "Admiral Issue". But the wonderful thing for collectors is that this set is both much more affordable, and it is possible to form a complete collection of all the plate blocks. It may even be possible to acquire a complete collection of plate sheets. I can say with reasonable confidence that such a feat is no longer possible on the Admirals, given that over 200 different plates were used to print each of the low values in that issue. However, it is possible to master this series without having to be a millionaire to do it. However, from what I can see after working on this issue for a month, I can see that doing so rigorously, with proper statistically valid paper and shade studies could well take a couple of decades.

Like the Admirals, one major point of interest for this series is the different shades that can be found on all the values of this series. Some of them are so subtle that they may at first appear to be identical and it will only be after close examination that you will see the differences. However, some are so drastic that one wonders how they have never been listed in the Unitrade catalogue.

I have already identified some 22 shades of blue and ultramarine that I have found on the 5c value and these were the subject of my last post. The 1c value has many fewer shades than this, but still quite a few as follows:

Predominately found on the low plates to plate 10:

Predominately found on the higher plates from 11 to 12:

There may be others such as pale chocolate brown, and red-brown. However, more stamps would have to be examined to establish the existence of more shades.

It appears that the first group of shades is found both in the sheet stamps and the booklet stamps, which first appeared in 1956. The second group is found on both the tagged and untagged stamps.