Showing posts from February, 2017
Show all

Today's post will explore two more complex aspects of this much under-rated issue: the booklets & booklet panes, and the coil stamps. Coil Stamps This is the only issue of Canada to have coil stamps in two different perforations: 8.5 and 9.5 vertically. The original issue that appeared between 1942 and 1943, was perforated 8.5, and was generally printed on softer paper. Later in 1948, the coils were reprinted on a thicker, stiffer paper and were perforated 9.5 instead of the 8.5. The difference is marked enough that with experience, you will be able to distinguish them from one another without having to measure the perforations. The scan above shows the two different perforations, with 8.5 on the left, and 9.5 on the right. As you can see, this difference of one hole, makes a large difference to the appearance of the stamps. In general, the perf. 8.5 coils tend to have holes that are often not fully punched, and are widely spaced, giving perforations that are much wide
3 comments
Read more 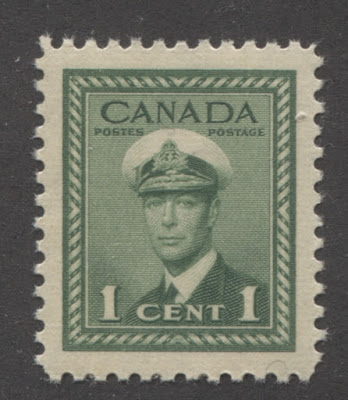 This is an issue that took a long time to grow on me. I found the designs in general lacked the ornateness of the earlier issues. It was years before I understood that the simplicity of the designs was intentional and meant to send a no-nonsense message to the citizenry. The idea was that in a time of war, one should direct all extra resources and efforts to fighting the war. Therefore it was determined that it would be inappropriate to continue with the ornate designs of the earlier, pre-war period. Once I was able to evaluate this issue in the broader historical context, I found that I was able to appreciate it far more than I had previously. It is a vastly under-collected set to be sure, with most collectors relegating it to a single page in their albums. However, it is probably one of the most complicated definitive issues of this period, as we shall soon see. The complexity comes mainly from the vast number of plate blocks and booklets, but as with the previous two issues, ther
Post a Comment
Read more
More posts