July 21, 2015
In late 1858 the post office decided to begin perforating stamps to facilitate quick and accurate separation. It was decided that the 1/2d, 3d and 6d values of the erlier pence issue would be issued thus, the 12d, 10d and 7.5d values being discontinued. The perforation used measures 11.75 on all sides.

This issue was very short lived, as Canada adopted decimal currency on July 1, 1859. Since the 1/2d rose was issued in December 1858, and the 3d and 6d values were issued in January 1859, this means that the issue had a life of around 5-6 months. Consequently only 850,000 of the 1/2d, 450,000 of the 3d and 70,000 of the 6d were issued. For a 19th century stamp issue for a country as populous as Canada was even back then, this is an absolutely miniscule quantity. As a result these are among the most elusive regular issues. If you are a perfectionist, prepare to be extremely frustrated, as these stamps are almost never found with perforations cleearing the outer framelines on all four sides. In fact, VG is the average grade for this issue. For an explanation of what I mean by VG and other grading terms, click on the following two links:


Like the previous pence issue, there are interesting shades to be found. The 1/2d comes in the rose and lilac rose shades, the 3d in red and brown red, and finally the 6d in brown violet and grey violet.  In addition the usual re-entries that are found on the 1/2d and 3d imperforate stamps are also found on this issue, as the same plates were used to print these stamps. In addition, stitch watermarks have been reported on the 3d and 6d. These are very rare. Finally, the 6d exists bisected diagonally on cover. This is an extreme rarity, cataloguing $25,000 in the 2014 Unitrade catalogue.

I have a nice 3d in stock illustrated below: 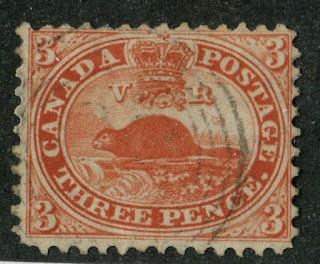 This is actually much better than average centering, as the perforations only just cut the outer frameline at the top left corner. Everywhere else, they just touch or clear the frame.

If you want to see this stamp in more detail, check out my store: