February 03, 2016
Today's post will address the limited range of shades found on the stamps of this issue. Unitrade does not list any varieties at all, even though there are at least 2 distinct shades of most values. I will deal with each value in sequence. 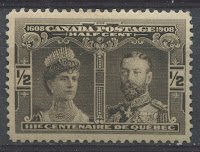 The colour on this stamp is very uniform, with most examples that you will come across looking like the stamp on the left. Occasionally though, you will come across one that has a lighter and brighter appearance, such as the one on the right. The difference is not significant, and the basic colour is the same, but if you look carefully at the shading around the portraits in particular, you can see that the stamp on the right is both lighter and brighter than the one on the left. 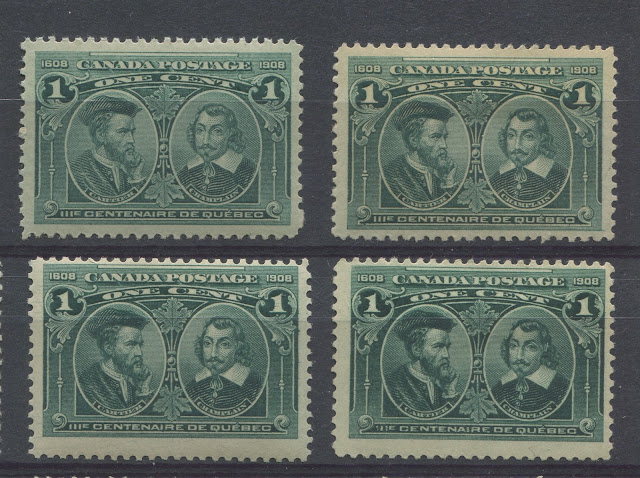 The variation in this colour is difficult to see in the scan above, even though it is quite obvious in the flesh. The blue green comes in a distinctly dull greyish tone as shown in the upper left stamp. Then there is a deep blue green, as shown in the lower right stamp. The lower left stamp is a similar blue green to the one on the lower right stamp, but is a bit less intense. Finally there is a dark green that lacks the bright bluish tinge of the bottom two stamps. This shade is the one on the top right stamp. 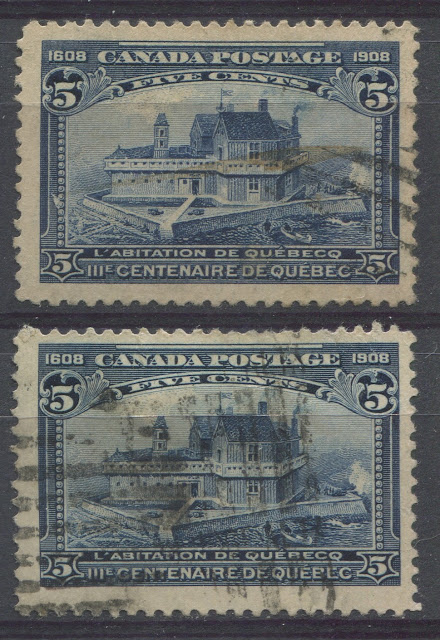 The five cent is a fairly uniform, clear, dark blue that has neither greenish, not greyish undertones as shown in thee top stamp. Occasionally though, you will find a dark blue that contains a hint of green, as does the bottom stamp in this pair of used examples.

This one of the values in the set that seems to have the more striking of the shade differences. We have from left to right:

The olive brown is quite distinct, and has more brown in the shade than green, while the olive green has an almost perfect balance of olive and green. The bright brownish olive has more green than brown in the mixture, as can be seen in the above scans.

Next to the 7c, this is the value that I find has some of the most striking shades. Despite Unitrade calling the colour violet, I find that most of the stamps I have seen are variations of purple rather than violet in that they do not contain enough blue to be violet. We have here three shades, which from left to right are:

In the last stamp on the right you can clearly see the bluish undertone, whereas this is missing on the other two stamps, which have a reddish undertone.

Unitrade used to list both an orange and a brown orange for this stamp, but removed the brown orange listing when it was discovered that the orange ink oxidizes. The left stamp appears brown orange, but there are slight signs of oxidation. So it is difficult to be certain that this colour difference is not entirely the result of oxidation. I do believe that there are some legitimate differences between these two colours, but to really be satisfied, I need to see an example like the stamp on the left that does not have any oxidation. The stamp on the right is the pure orange, which is the colour that you will see on the vast majority of the stamps that you encounter.

I do not have any examples of this stamp in a shade other than dark brown, but I have seen some stamps printed in a brown that has a distinct yellowish cast to it. I will add an image of the difference between these two shades when a suitable example becomes available.

The next post will talk about plate blocks, sheets and plate multiples of this issue.