May 31, 2016
Now that I have just completed my initial sort of some 2,000 1c, and 3c Small Queens, I thought it would be good to share some of my initial insights about their characteristics. In doing this I have decided to focus on the perforations only for now and later, after my other shipment of 3,500 stamps arrives, I will look at paper and shade. So what I have done is use my Instanta perforation gauge to check all 2,000 or so stamps that were present in this lot. Under a heading for each perforation measurement that I have found, I will note my general observations about:

One correction I must make to yesterday's post had to be made upfront regarding a comment that I made about Mr. John Hillson being incorrect about the second Ottawa period not containing any perf. 12 x 12.25 stamps. I had indeed read a comment in his article to this effect, but then found other references by him where he says that they do in fact exist, which is wholly consistent with what I have seen so far.

Before I get into the detail about the perforations, I must emphasize the importance of using an Instanta gauge when studying this issue rather than the Kiusulas gauge or any cheap perforation gauge that is only accurate to the nearest 1/2. The reason is that there are differences on this issue that are 1/10th of a perf. or 1/7th of a perf. These will not be picked up at all by these less accurate gauges, which mean that you might miss a difference that turns out later on to be of vital significance. Just as important as using this gauge is to know how to use it properly. Because it is so accurate, in order to obtain a completely accurate reading it is important to do the following:

1. Place the stamp against a black background (I find a black 102 card works very well).
2. Take the gauge and line up the guide-line at the left so that the line passes exactly through the middle of the leftmost perforation tooth. It is vital to use the left-most tooth, otherwise your reading may be off by 0.1-0.25.
3. Then slide the gauge up or down until each perforation tooth is exactly bisected by one line on the gauge. When you reach this point, secure the gauge and then look across to the left or right for the numeric reading. The horizontal lines on the gauge denote one-quarter readings, with the whole number readings and the 1/2 readings being in between these lines.

I cannot stress enough how important it is to ensure that the guide line is perpendicular and that it passes through the centre of the top and bottom perforations at the extreme left of the stamp. You will find that you can make a reading vary quite a lot just by fiddling with the angle. But if your gauge is completely straight and placed properly on the stamp you will obtain a completely accurate reading and will see that no other reading will be as close. To do this I find a good way to obtain the necessary control over the gauge while having the right amount of movement is to hold the 102 card in my left hand, with my thumb of that hand securing the left side of the gauge. I then hold the gauge in my right hand, with my middle and index finger above and below the gauge and my thumb over the right side of the gauge as illustrated below: 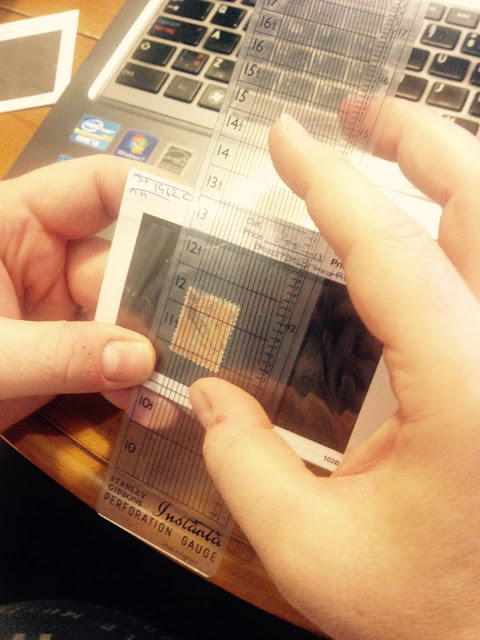 I find that by holding it this way, my thumbs can secure the gauge and hold it in place and keep it straight while my fingers can move the gauge up and down while I align the lines with each of the perforation teeth. I used to lay the card down on the table and do it that way, but I found it harder to keep the gauge lined up properly while I moved it up and down, whereas I find that this technique gives me more control.

So now, without further ado, I give you my observations of each group of perforation measurements that I have come across.

Out of over 900 1c stamps, I only had 11 stamps from this period. Out of almost as many 3c stamps I had 37 stamps. So it is clear that stamps of this period are very scarce and seldom found in mixed lots.  Hillson states in his articles that stamps from this period are often found perf 11.9 or 11.75 all around. I may yet see examples that concur with his observations, but what I have seen are three compound perforations:

It may be that these are the earliest Montreal printings, but based on the shades that I see in this group, I don't think so.

Most collectors are aware of the fact that many of the Montreal printings come perf. 11.5 x 12, and that this perforation was in use from about 1873 until around 1880. In actual fact, the true horizontal measurement appears to be 11.6 rather than 11.5. In addition to this though, there seems to be three different vertical measurements: 11.75, 12 and 12.1. Hillson notes the existence of the first two, whereas I have found the 12.1 measurement when looking at the stamps in this lot. As one would expect, these are fairly scarce stamps with only 32 1c stamps and 48 3c stamps.

In between 11.5 x 12 and 12, there exists a horizontal measurement of 11.75, which is noted by Hillson in his works. I can see that within this measurement, there is 12 and a 12.1 vertical measurement. This group appears to be just as scarce, if not slightly scarcer than the perf. 11.6 x 12 group. Hillson states that this perforation dates between 1876 and 1878.

It would appear that the answer to the question: "were the different perforations used concurrently or in a logical progression?" is both. The 11.9 and compounds with 12 do not appear after the first Ottawa period. And the perf. 11.75 x 12 and 11.6 x 12 groups do not appear before 1873 or after 1881. The perf. 12's seem to run through the entire period and the 12.25's and combinations of 12.25 and 12 do appear to have been used much earlier than 1887. Furthermore, it would appear that they were in use pretty consistently until 1897. The fact that I have seen a 3c Montreal with a position dot in this later perforation group does suggest either that the position dots were still found on some stamps after 1880, or this perforation was in use that early. I suspect what happened was that there were several perforating machines that were run simultaneously as production took place:

Another take-away from today's study is that while position dots are useful for identifying Montreal printings, most Montreal printings are not going to have them. Also, looking at the appearance of the paper surface under a loupe just might be the best characteristic to use to sort your stamps after you have got done with checking the perforations. It is a fairly objective test that will help you identify right away which stamps are likely to be second Ottawa. Then later you can use the printing impression, shades and cancellations to make a final decision. Once you have separated out all the smooth surfaced papers, from the rough ones all the smooth ones are going to be Montreal by default. Finally, it is apparent that most, if not all of the barred grid duplex cancellations are from the Montreal period, so if you have a stamp with that type of cancellation, chances are it is a Montreal printing.

So that concludes my initial insights on this issue until the rest of the stamps I purchased this week arrive and I can begin working on them.