Today's post will examine the different booklets and booklet panes that were in use during the life of this popular series. The Admiral issue has the distinction of being the first issue to introduce booklets in two different basic language formats: French and English. This dual language format would continue until the introduction of bilingual booklets in the 1940's during the life of the War Issue. As we shall see, the French booklets were issued in much lower numbers than the English booklets, making them very scarce today.

All the booklets of this issue consisted of a plain front and back cover, generally in the same colour as the stamps inside, with an engraved coat of arms and either the inscription "Canada Postage" or "Timbres Poste". The booklets were bound, in most, but not all all cases by a strip of coloured tape, which was always in a darker version of the colour of the stamps inside. Over top of this would be a single staple to hold everything together. I believe that the width of the staple bar was generally 17 mm. In all cases, the booklets would contain between 2 and 4 panes of different stamps, with a face value adding up to 24c. They were always sold at 25c, so there was a 1c premium over the face value of the stamps - a kind of fee for the added convenience of having stamps to carry around. Inside each booklet would be a page containing information about current postage rates. These pages are known to philatelists as "rate pages". They are usually printed in a particular font style, and this style could and often did change during the lifetime of the issue.

Also, wet and dry printing differences will come into play whenever a particular booklet includes stamps that were in use during the transition from the wet printing process to the dry process. In addition, for the 1c and 2c stamps, the early printings were on horizontal wove, rather than vertical wove paper, so that the shrinkage that occurred caused the stamps to appear short and squat rather than tall and narrow. Finally, the covers would occasionally be overprinted when the postage rates changed, with a warning notice to that effect.

The Unitrade catalogue lists 8 basic booklets, but with variations in the covers, the printings and rate pages, the number of listed varieties balloons to 30 collectible booklets in the English format, and 23 in the French format. I'm sure that one could probably add shade varieties in both the stamps and possibly the covers to this as well, but these are not listed in Unitrade. The Standard Catalogue of Canadian Booklet Stamps by Bill McCann, states that all booklets of this issue exist with gummed and ungummed tabs, which further increases the number of collectible varieties.

The booklet panes inside the booklets were printed in large sheets, each containing a number of panes, with two major blocks of panes which were inverted in relation to one another. The requisite number of sheets would be assembled together along with the rate page sheets, interleaving to prevent the stamps from sticking together, or to the covers, and then the covers. The binding tape was added in vertical columns and then the staples. Finally, the booklets would be guillotined apart. Because of this process, it is common to find miscut panes where the panes have very small outside margins.

Because of this, and due to other factors, such as the ease of creasing the covers, staining the covers and the tendency of the staples to rust over time, it is challenging to obtain booklets in pristine condition. Most booklets one comes across are generally only fine.

There were two basic layouts of stamp panes for these booklets:

The two layouts are shown below: 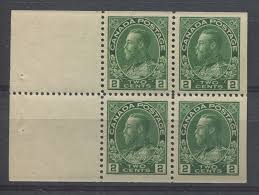 The panes of 6 were used for:

The panes of 4 plus 2 labels were used for:

These were combined and issued in the following booklets, with issue quantities:

Looking at these issue quantities and considering the catalogue values, we can see that some of these are wildly undervalued: most notably all the French booklets and the last two combination booklets in either language. I suspect that the main reason for this is lack of demand relative to other scarce varieties. No printed album on the market provides any spaces for complete booklets so there is little demand from general collectors, and all the booklets are listed in the back of the catalogue, so that they tend to get overlooked in general. However, the above quantities show that even the most common booklets are still much scarcer than most stamps, and we can expect that the survival rate for intact booklets would be much lower than for the corresponding sheet stamps. Thus for those collectors looking for an area of the philately of Canada that offers much upward potential due to scarcity, the booklets would be one of my top picks.

The approximate issue dates for the booklets are:

There are four basic types of rate page sheets that can be found with these booklets:

On the rate sheets for the booklets containing stamps issued in 1922-1923, i.e. the 1c yellow orange, 2c yellow green and 3c carmine there are usually slogans found, and the text of these slogans can either be 3.5 mm high (small) or 7.5 mm high (large).

The basic progression of types is as follows:

Although not made explicitly clear in Unitrade, McCann states that the large type I text is found on the first printings of both the 1c green and 2c carmine booklets. The 1c green booklets are found in two shades: blue green and deep blue green and both are the squat printing. As stated in my posts about shades, the so-called blue green shades are really shades of Myrtle green and bottle green if you are using the Stanley Gibbons colour key for identification.  The 2c carmine is also found  in shades of rose-carmine. However, there are two sizes of design: 17.7 mm x 21.5 mm and 18 mm x 21 mm, of which the later is regarded as a quat printings. The normal printings are usually 17.7-17.75 mm x 21.5 m, so that the difference is generally that the vertical measurement of the squat printings is 0.5 mm less than normal. The deep bright rose reds and scarlets that are commonly seen are the later printings. Both the 1c and 2c booklet panes must be on horizontal wove paper and not vertical wove. Otherwise they are likely fakes that have been made by reassembling the more common panes with genuine covers and rate pages into new booklets.

Booklets With Small Type I Text on the Rate Pages

The small type 1 text is found on the intermediate printings of the 1c green and 2c carmine booklets. This time, the paper is vertical wove and the dimensions of the printing are the 17.7 mm x 21.5 mm. The green stamps are generally yellow green at this point, or just plain green, while the 2c shades are the deep bright rose reds and scarlets. The 2c booklets can be found with the rate-change notice handstamped on the front cover.

Booklets With Small Type II Text on the Rate Pages

Again, the booklets found thus are the 1c green and 2c carmine booklets. The comments regarding paper, printing dimensions and shade made above apply here as well. The 1c booklets from this group can be found with the rate change notice overprint on the front cover.

Booklets With Sans-Serif Text and Slogans on the Rate Pages

These types of rate pages are found on all booklets containing 1922 type stamps:

All of these exist with both the small and large text, and in each case, they are found in both English and French versions. The only exception is the 2c yellow green with the large capitals which seems to exist only in English.

In addition to collecting one of each of the 53 listed booklets in Unitrade, one can also study the text of the rate pages looking for additional unlisted types. It is conceivable that there may be hitherto undiscovered type differences. Another avenue for expansion is to look for shade variations of each of the basic stamp colours. As stated above, the scope of the 2c yellow green booklets can be expanded with wet and dry printings.

Finally, a real challenge would be collecting the complete panes used, used on cover and the single stamps with nice socked-on-the-nose CDS town cancels in period. Although the number of English booklets issued was quite high for the 1c green and 2c carmine and the resulting number of stamps was quite a bit larger, this still works out to far fewer stamps than were issued in sheet format. Only a small percentage of these will have survived, and of these, only a fraction will have nice CDS cancels. Indeed, one could concentrate on just this aspect of the issue and form a very fine collection over a lifetime.