October 17, 2017
Today's post will complete my discussion of the inks used on this issue as they appear under long-wave ultraviolet light. Last week's post examined up to the 15c Bylot Island. This week, I will look at the 20c through $1 values.

The inks used to print this stamp are primarily non-transformative in that in most cases, the appearance of the colour under UV light is either the same as, or just a bit darker than how the colour appears under normal light. There are however, some cases in which the ink loses much of the blue and becomes either a very deep blue-black, or black under the UV light. These inks are transformative.

Let's take a look at them under UV light: 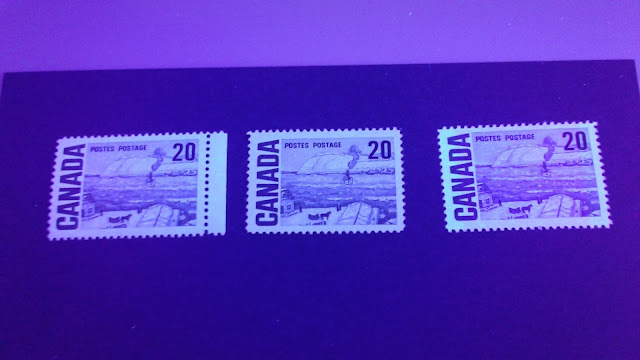 In this picture, all three of the stamps look very similar, but in reality, the stamp in the centre is the darkest. In all three cases, the inks appear darker than they do in normal light, but all three of them are shades of blue, which are not substantially different from the shades under normal light. This is why I have classified them as non-transformative.

All of the PVA gum stamps I have examined so far, appear to have been printed with non-transformative ink.

I have only come across two examples of this stamp in the transformative ink:

Here are the same two stamps under UV light: 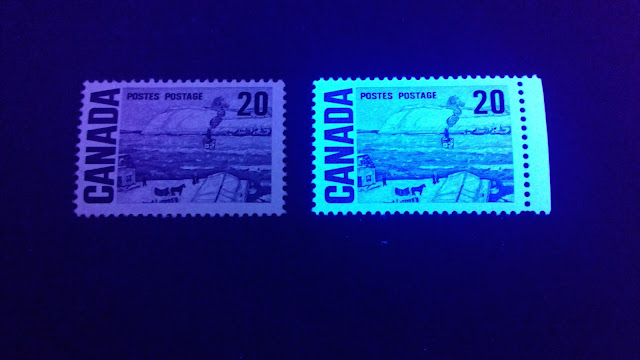 This picture is another excellent illustration of the vast difference in appearance, between dull fluorescent paper and hibrite paper. The stamp on the left is still a little bluish, but the colour has acquired so much black that I consider it a transformative ink. The appearance of this stamp under UV is very similar to the appearance of the middle stamp in the first group above. The difference though, is that the middle stamp from the first group already looks blue black in normal light, whereas the stamp shown here looks much brighter blue. The ink of the stamp on the right, as expected, appears black, as do most stamps on hibrite paper.

From the stamps I have examined, the vast majority are printed in transformative ink which tends towards blackish green or black under UV light. A few printings were made in dull blue green which appears either darker under UV, or the same as normal light.

Let's take a look at two stamps which are printed in non-transformative ink:

Here are both stamps under UV light: 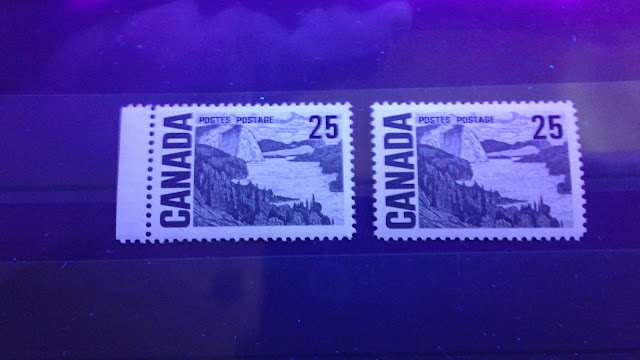 Both stamps appear blackish in this picture, but in reality, enough of the green remains in the colour that I consider this ink to be non-transformative.

Let's now look at five stamps that are printed in transformative ink: 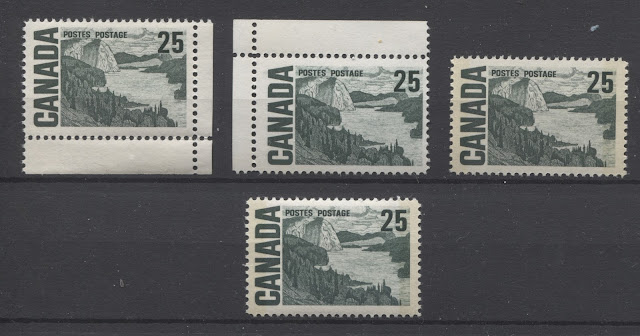 On the first row we have three deep grey green stamps, all printed on dull fluorescent paper. The paper of the left stamp is horizontal wove, whereas the centre and right stamps are on vertical wove paper. The left and centre stamps have type 4 dex gum, while the right stamp has type 1 dex gum, and is Winnipeg tagged. On the second row is a dark bluish green stamp, on vertical hibrite wove paper, Winnipeg tagged and with type 4 dex gum.

All of these five stamps contain a significant amount of green under normal light, although in the case of the top three stamps it is a very dark green containing some black.

Here are the same five stamps under UV light: 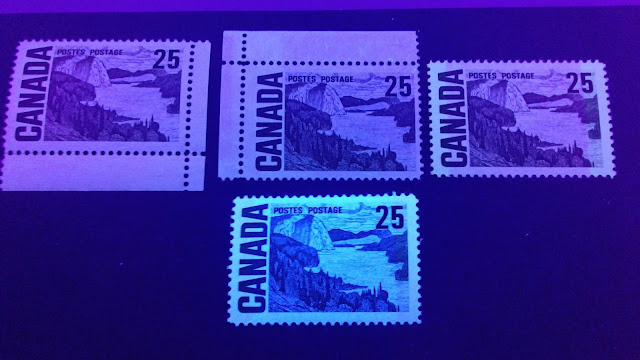 On the top three stamps, the ink almost appears black. There is still a very slight hint of green, but it has acquired so much black compared to how it appears in normal light, that I consider these inks to be transformative.

As is the case with practically all the hibrite stamps examined so far, the bottom stamp appears to have been printed from black ink.

In terms of inks, this is one of the more interesting values in the series, because of the dramatic difference that introducing UV light makes to the appearance of most of the stamps. In ordinary light, the colour of this stamp is either a shade of brown orange (most commonly), or it is a shade or orange brown (less common). With only a few exceptions, the ink completely changes colour under UV - usually to shades of dark brown, dark red-brown or black.

All of the PVA gum stamps that I have examined thus far, and a few of the dex gum printings made on dull fluorescent paper, are printed in non-transformative ink. The colour appears far, far darker than in normal light. However, enough of the orange remains visible, that the fundamental colour under UV is not any different than under ordinary light.

Here are two such stamps in ordinary light:

Here they are under UV: 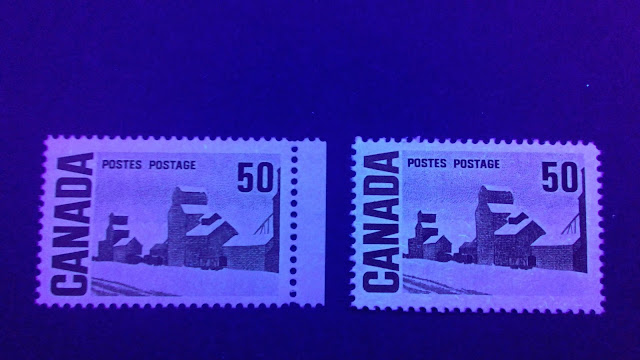 In this picture, both inks appear quite blackish. In reality, while they are dark, both are very clearly shades of brown orange, and hence the reason why I classify these inks as non-transformative.

Now, lets take a look at them under UV: 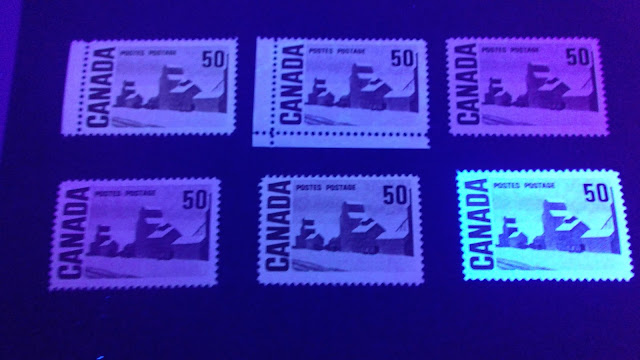 This picture shows the differences between low fluorescent, dull fluorescent and non-fluorescent papers quite nicely. As you can see, all of the colours look dramatically different under the light. The upper right stamp is the closest to the brown orange colour, but it has become so deep that it looks more deep brown than orange, even though some orange is still coming through. The middle, top right and bottom left stamps are a very deep red brown. The middle stamp is a deep, orangy brown, which is much closer to brown than it is to orange. Finally the lower right stamp, as with most all the hibrites appears black.

Except for the printing on hibrite paper, all of the $1 stamps that I have examined are printed in non-transformative ink. The basic colour is deep scarlet red with a hint of carmine, and for most stamps, this colour merely appears deeper under the UV light. But in all cases, it is clear that the colour is a deep scarlet red or carmine red. 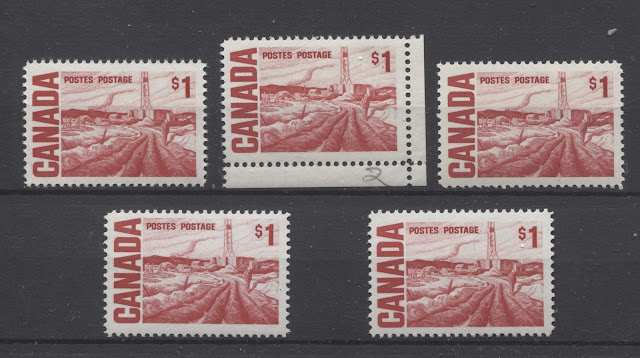 Here are those same stamps under UV light: 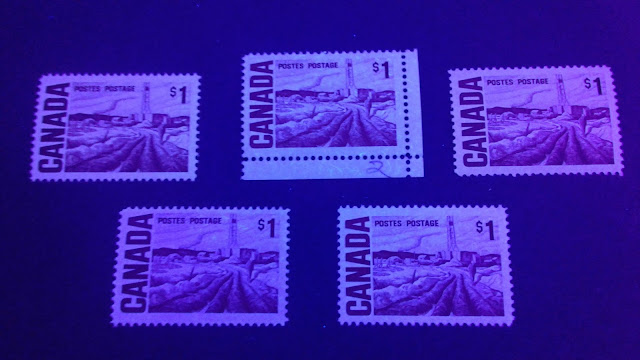 Unfortunately, this picture obscures the differences between these stamps and makes them all appear blackish under the light. In reality the top two stamps both appear more or less the same carmine-red colour that they appear in normal light. The stamp at the top right appears much darker, but still a clear carmine-red. On the bottom row, both stamps appear carmine red, but the left stamp is a brighter colour than the right stamp. I have also examined a copy of the PVA gum printing on medium fluorescent paper and can confirm that it displays the same ink characteristics as the printings on low fluorescent paper. So I have not felt the need to illustrate it here. 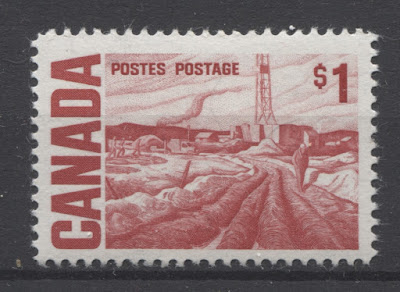 Here is an example of the bright scarlet-red on hibrite vertical wove paper, with type 4 dex gum. As expected, when examined under UV, the ink colour appears black: 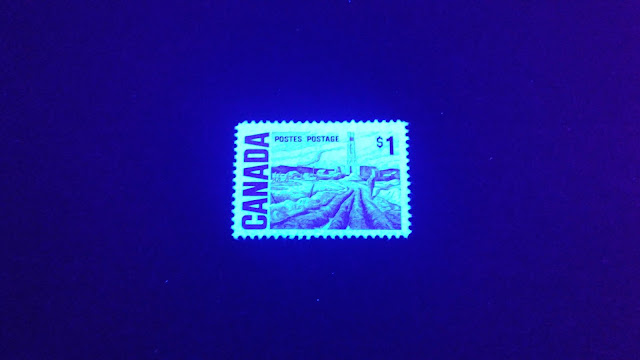 This concludes my examination of the inks used to print the Centennial issue stamps. Next week's post will start to examine the Winnipeg tagging that was added to some printings of the stamps made between 1967 and 1972. Unitrade only lists the basic tagging configurations, but there were variations in the intensity of the taggant coating and in the appearance of the tagging under UV, as well as the width and spacing of the tag bars themselves.