The Commemorative Issues of 1969 - Part Two 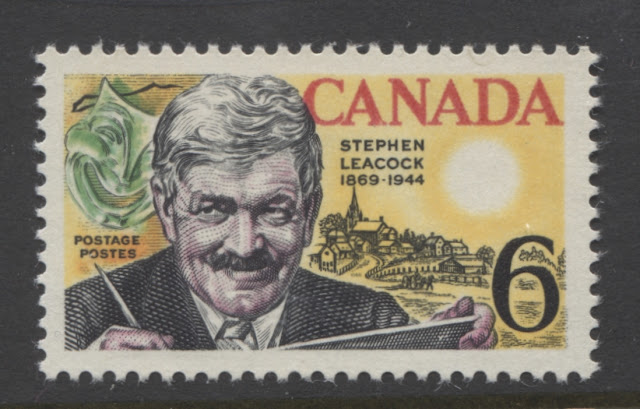 Today's post completes my examination of the 1969 commemorative issues of Canada, and looks at the last 9 stamps issued in that year. Canadian Bank Note Company (CBN) printed all but two of these using either lithography or engraving and lithography, while the British American Bank Note Company printed the other two, using engraving and photogravure.
For these last 9 stamps, high fluorescent or hibrite paper is now the norm, for all except two issues: the Issac Brock Issue and the Stephen Leacock issue, which was the last one to appear on November 12, 1969. Unitrade does list a dull paper variety on the other BABN issue, the Charlottetown Bicentennial, though no other dull paper varieties, are, as yet known on the other issues. Gum and perforation displays the usual variations that were noted in the last post and there are a good number of constant varieties on the lithographed stamps. None of these were listed 20 years ago, having all reached prominence since then. So, there may well be others to discover, that are of a semi-constant nature. This was also the second and last year that the Christmas issues were available in the large softcover booklets of 20 stamps. The probable reason for this was that the booklets tended to fall apart. We won't see Christmas booklets again until 1985!
As expected, the stamps of the later half of 1969 are generally all found on either high fluorescent or hibrite paper. What is interesting is that for most issues, there are between 2 and 3 varieties of the high fluorescent or hibrite paper. Only two of the issues are found on dull paper, and for these, it turns out that there are several varieties of each, including some that are non-fluorescent and others that contain enough fluorescent fibres to make them low fluorescent - both facts that Unitrade does not make clear.
In addition to the listed constant varieties, I show several of the non-constant donut flaws and repellex flaws that can be found on the lithographed stamps, which form an interesting study, I think. Finally, all the usual perforation varieties for the CBN line perforation are present on these issues, as are all of the gum variations that I have discussed in previous posts.
To see the post in its full detail, access my website, via the following link:
https://brixtonchrome.com/blogs/canadian-stamps-and-postal-history/the-commemorative-issues-of-1969-part-two
1969 Commeoratives