The Commemorative Issues of 1972 - Part Two 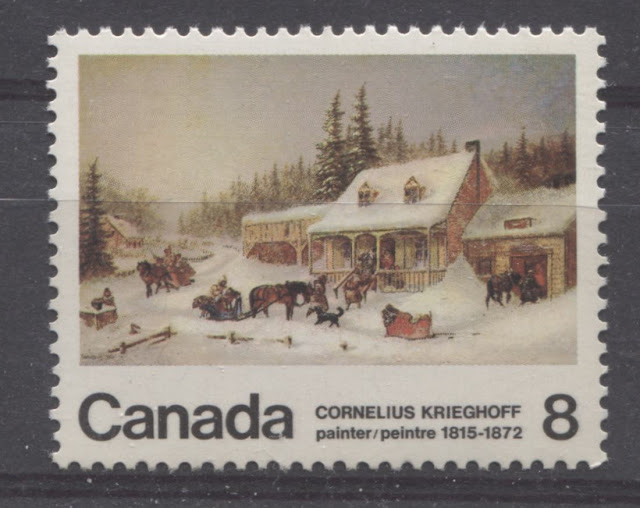 This week's post, my first of the New Year, is the last one that will deal with commemorative issues for a while, as next week I will begin my foray into the complicated 1972-78 Caricature Issue, which I expect will be a very popular series with my readers.

This post deals with just three issues: the Earth Sciences Issue, the Christmas Issue and the Cornelius Krieghoff Issue. Collectors will already be familiar with the fact that there is the Ottawa and Winnipeg tagging on the Christmas issue, and the five constant varieties on the Krieghoff issue. However, as the detailed post on my website illustrates, these three issues are much more complicated than you Unitrade would lead you to believe.

For starters, there are the paper varieties. Each issue was printed on paper having different physical characteristics, in terms of thickness, colour, texture and weave direction. The usual range of fluorescence on the front and back of stamps are found. making for a lot of collectible varieties.

Secondly, the Krieghoff stamp exists with at least 24 constant varieties, and what is most interesting about this is that the varieties only usually occur on one position from one of the four panes of 50 that comprised the press sheet. In my detailed post I illustrate 9 of the remaining 19 varieties that are not listed in Unitrade. Although I do not illustrate all 24, as I do not know what some of them are, I will be adding more to this post as I identify additional varieties.

Perforations and gum are much more uniform than before, although, there are some interesting differences to be sought in the size of the perforation holes, as well as the selvage, which exists both imperforate and perforated through on the Christmas issue.

You can read all about the above in the full detailed version of this post, which is located on my website. You can access it at the following link: