This week I cover the aspect of the tagging on these stamps. A lot has been written in the catalogues such as Unitrade over the last 30 years about the tagging on these stamps, that did not used to receive any attention at all: namely the distinction between the OP-2 and OP-4 variations of Ottawa tagging, as well as the 3 mm and 4 mm variations. However, there are other qualities to the tagging that are worthy of attention by the diligent specialist as well. This week's post discusses two of these in depth:

1. The intensity of the tagging, as it appears under normal light, and
2. The different methods that were used to apply the tagging to the stamps.

The method of application of the tagging seems to have differed for the various printings also. This concept is not new, as those familiar with the Great Britain stamps for the 1960's will no doubt have had some exposure to this already. For that country many of the phosphors can be found applied either by typography or flexography.

The low value stamps printed by CBN always have tagging that appears completely solid under UV light, and it would appear that this was applied by flexography. However, for the stamps printed by the BABN, the earliest printings show a distinct "screened" appearance to the tagging, in which a dotted pattern is clearly visible within the tagging. Later, this gives way to far more solid appearing tagging, which appears deeper and brighter yellow under UV. Finally, the last printings of the perf. 12.5 x 12 and all the printings perf. 13.3 show clearly mottled tagging that appears to have been applied by rubber cylinder. 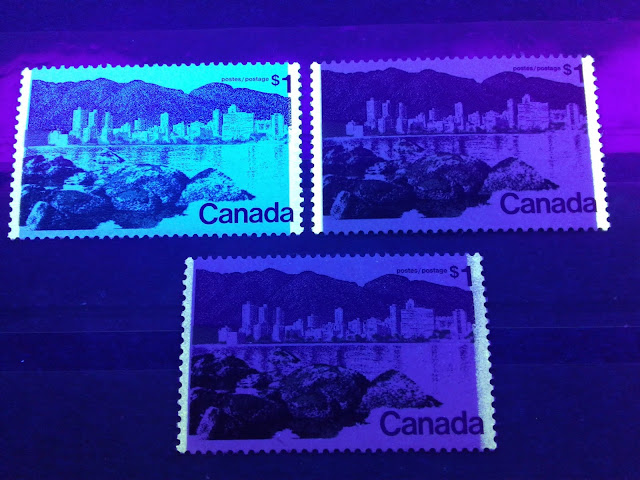 In this picture, the bottom stamp is one of the original 1973 printings showing the screened tagging. The upper left stamp is the mottled tagging on a late printing made on hibrite paper, while the upper right stamp is a more solid, but not mottled tag, from one of the mid-range printings made between late 1973 and 1975.

Be sure to visit my website to read the full post. In my post I also present some of the tagging varieties that are found as well as the 1-bar tag shifts. You can access the full post by way of the following link: