November 17, 2015
Today's post on this fascinating definitive issue will look at some of the error material that can be found, as well as the proof material. 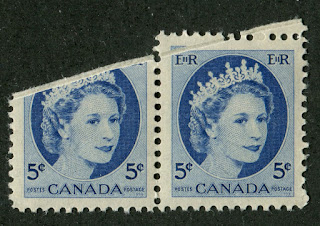 Because of the random nature of these errors, the Unitrade catalogue generally does not list them. However, there are two gutter pairs that exist for this issue that are thought to have resulted from such an error, and are listed. They are:

In addition to the above gutter pairs, there are some partially imperforate varieties known as follows:

Again, all of these are very expensive. The minimum catalogue value of $900 is for a single of the 5c imperforate at left margin without gum. The others are all worth around $3,000 each. There are no imperforate pairs of any of the stamps known.

In addition to foldover errors examples of the stamps in this issue can be found with dramatically shifted perforations. Usually these sell for between $30-$150 each depending on how dramatic the shift is. Again, because of the random nature of this type of variety, none of them are listed in Unitrade.

The BNA Proofs website does not list a lot of proofs for this issue. Apart from the above tinplate proof of the 5c blue, printed in black, which is unique, and upon which they place a value of $2,500, the only other proofs they list are of the 15c Gannet stamp (all printed in black):

However, there must be much more proof material in existence than just this surely. At an absolute minimum, there should exist at least finished die proofs on card of all values in their issued colours, because that is the process by which stamps were printed by the Canadian Bank Note Company. That of course assumes that the CBN used all the proposed issue colours and did not go through several trial colours before deciding which colours to use. That would be highly unusual. So there should also be some trial colour proofs in existence. Finally, because this stamp design was based on a photograph, there should also be some photographic proof material in existence.

Indeed there is. My online research turned up quite a few that are shown on the Postal History Corner Website. I don't want to plagarize this site by reproducing every image that he has on his site, but I will provide the link and a summary of what he lists:

He illustrates the following items

Based on what I found in my search, there must be a fairly wide range of essays, trial colour proofs and die proofs of this issue. The real question is how much of this material is available to private collectors, versus how much of it is kept in the national archives? Of course, just because the majority of them are public property now, does not mean they will be forever.

That concludes my discussion of all the stamps connected with this issue. My next post will look at the possibilities that exist with the postal stationery, first day covers and postal history of the stamps of this issue. I am quite far behind in my listings of this issue on e-bay and need some time to catch up before I start writing about the Cameo Issue. So I will probably do some general posts about collecting modern versus classic stamps and a post about paper fluorescence, in order to try and clarify some of the technical terms that are contained in my posts.